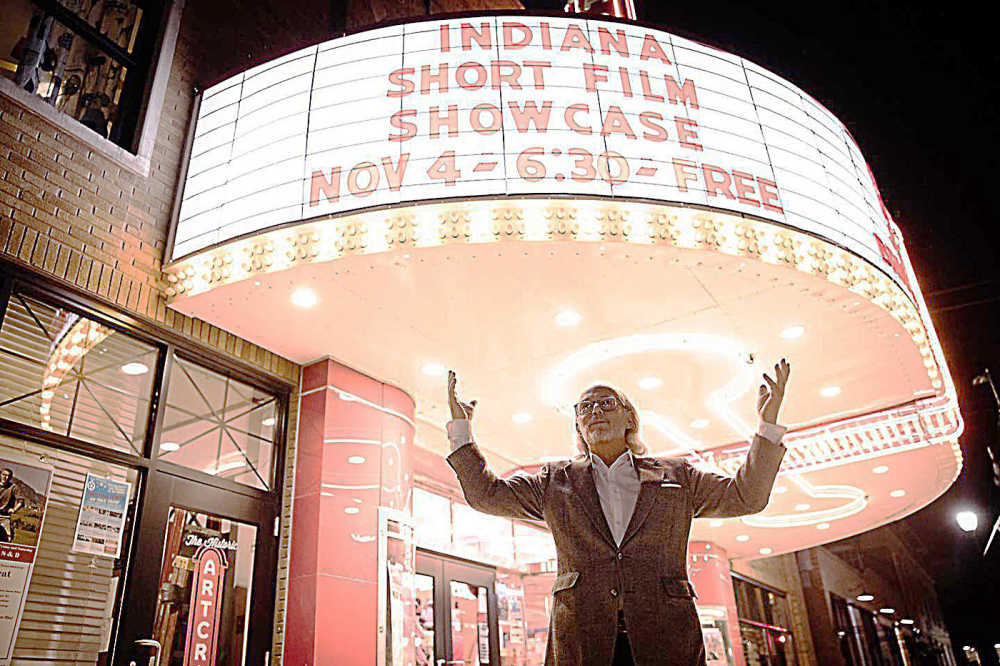 Joe Buser strikes a pose outside the Artcraft Theatre after the conclusion of the Indiana Short Film Showcase Monday evening.
Courtesy Liina Raud

FRANKLIN ­— Exactly a year after the Indiana Film Race concluded its inaugural season and put the local film community on notice, advocates and community leaders were recently provided a unique opportunity to see its impact.

Three of those films were the ones produced by the teams that roved in the competition last year, including Gold Point Studio’s “Golden Voices,” which was chosen as Best Picture during the IFR’s closing ceremony last November.

The event also functioned as a kind of birthday party for the Artcraft Theatre itself, which celebrated its 97th opening anniversary a week ago.

While the event was a celebration of independent filmmaking in Indiana as a whole, the Indiana Film Race was recognized as a potent launching point for what can be done to promote economic development and tourism through film. 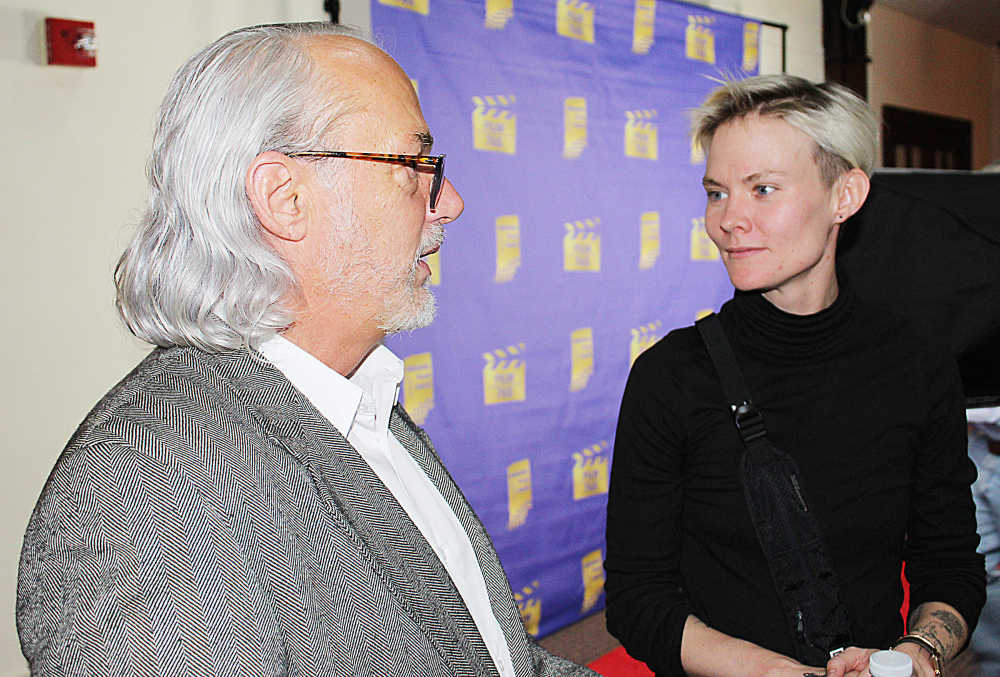 Joe Buser talks with photographer Liina Raud during the social event prior to the viewings of five Indiana-produced short films.
Banner Graphic/Brand Selvia
Order this photo

“Film can be a major driver for economic development,” Buser said in his introductions before the viewings began. “When more eyes are on Indiana, more people will potentially visit, do business with and move to our area.”

He added that he hopes to continue working with area visitors bureaus, economic development groups and corporations to actively “market” destinations before, during and after filming and the release of a film.

Buser related that FILM 765’s initiative takes inspiration from other film groups and events, such as the Indianapolis Film Commission and the Heartland Film Festival, which are committed to promoting film in Indiana. However, he stressed that collaboration remains pivotal.

“We only wish to add more tools to our toolbox,” Buser said. “This full and measured toolbox is essential as we continue our collaborative pursuit.”

Buser also briefly gave a rundown of the Indiana Film Race as a competition where three film teams have five days to shoot at various locations in five different counties. Each team is given a budget, an RV and a post-production timeline, and have a $10,000 grand prize on the line.

Buser and his team, including actors T.J. Karam and Landon Smith as the producers of the Film Race’s behind-the-scenes (BTS) content, have remained cognizant of the competition’s novelty. But with the support and attention it has received, they have the confidence that more will invest in the project.

“The successful Indiana Film Race in 2018 was a proof of concept, and was produced on a shoe-string budget,” Buser said. “Now that we know that our concept has legs, it is essential to now up the ante, and obtain full funding in order to make this an artistic and distribution success.”

A notable cast of film organization leaders based in and around the Indianapolis area also attended the showcase.

They included Ken Kowsky, director of tourism for the Johnson County Convention, Visitor and Tourism Commission; Morgan Snyder, director of public relations for the Indianapolis Film Commission; Thomas DeCarlo, co-owner of the Hoosier Films streaming service; Craig Mince, the artistic director for the Indy Film Fest; Greg Sorvig, the artistic director for the Heartland Film Festival; and Amy Howell, the director of communications and media relations for Film Indiana.

Mince also has a hand in managing the Athenaeum Theatre, which recently hosted the “Ghost Hunters” team from its popular show on the A&E network. He highlighted the resulting publicity as an example of what can happen in attracting film crews outside of Indiana.

Snyder spoke more on how beneficial it could be for Indiana lawmakers to introduce tax incentives, which would offset costs for a major film production, and thus not turn them away.

Though this may be an international connection in a small-scale sense, the event was also able to singularly attract the talents of Liina Raud, a photographer who hails all the way from Estonia in northern Europe.

She is married to Mihkel Raud, a writer, actor and musician and a former member of the Riigikogu, Estonia’s parliament. Liina has also been involved in politics and activism in her native country, but photography is a true passion of hers.

Raud moved to the United States about three years ago and lived in San Diego, before she eventually settled into the bustle of Chicago. She then met Smith, now one of the Indiana Film Race’s two out-there hosts, who then invited her to the fold.

“I’m just happy to be a part of this,” Raud said during the social event held in the museum. “It’s an amazing opportunity for me as a photographer.”

In another iteration of things coming back around, Layne Marie Williams, who directed “Golden Voices” for the Indiana Film Race last year, was recently tapped as the competition’s BTS director.

“This feels definitely within my wheelhouse,” Williams said. “I think it’s definitely going to be an adventure.”

She also touched on how Buser, Karam and Smith have embraced her in her new role, seeing as she certainly knows what it takes to make a worthwhile film. As such, Williams has her own idea of how following the teams will work this time around.

“For the next Film Race, I see it as an opportunity to create more editorial content, to make it as a lifestyle documentary,” she said.”I think that I have an eye for pace, and the goal is to make the BTS digestible to show what it’s all about.

“It’s more than an idea,” Williams added. “It’s about building strong teams who can work together.”

As the showcase wound down and the Artcraft Theatre was vacated, Karam offered some quick perspective about the continuing development of the Indiana Film Race.

“We realized that it worked to highlight beautiful and historic destinations in Indiana,” Karam said. “The success of the Film Race last year gave us renewed excitement to do it again.”

“We can’t wait. We’re really excited for what we have in store.”

Buser shared during his speech that the Indiana Film Race will highlight destinations in Hamilton, Johnson and Marion counties next year. The other two counties will be announced in the next few weeks, with the competition set to be under way next June.