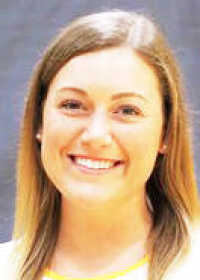 DePauw senior right-side hitter Morgan Stearley (Center Point, Ind./ Northview) has been named the North Coast Athletic Conference Player of the Year in voting by the conference’s coaches. This marks the second consecutive season a DePauw player has earned the distinction after Suzanne Peters garnered the award last year.

For the third time in Stearley’s career, she has also been named to the All-NCAC first team. In 27 total regular-season matches, she has led not only the Tigers but the NCAC in kills per set (3.92) and points per set (4.4).

Joining Stearley on the All-NCAC team was senior outside hitter Liv Hartman (Danville, Ind/ Danville), who was named to the second team for a second straight year after earning an honorable mention in 2017. Hartman had a significant role in the Tigers matchup against Whitman in early September, tallying 11 kills and just one error, resulting in a .400 hitting percentage, across DePauw’s three-set sweep. On the defensive, she has recorded 29 block assists this season, putting her on track to surpass her last two seasons’ block assists totals in fewer sets.

Stearley has been named to the 2019 AVCA Division III All-Great Lakes Region Team.

This is the first time Stearley has been selected for the AVCA Division III All-Region team.

Her current career kills (1322) and kills per set average(3.39) put her in the top six and top four career leaders respectively. This year alone Stearley has been named NCAC Athlete of the Week twice and was selected as the NCAC Player of the Year.

Perkins is an economics major, while Stearley majors in kiniesiology.

Stearley and the Tigers continued postseason play on Thursday, Nov. 14 in the NCAA Division III Volleyball Championship. In the first round of regional action, the DePauw Tigers took on host school Calvin Knights. The match was still in progress as of press time.