LAST MINUTE MUSINGS: The Bell is back in more ways than one 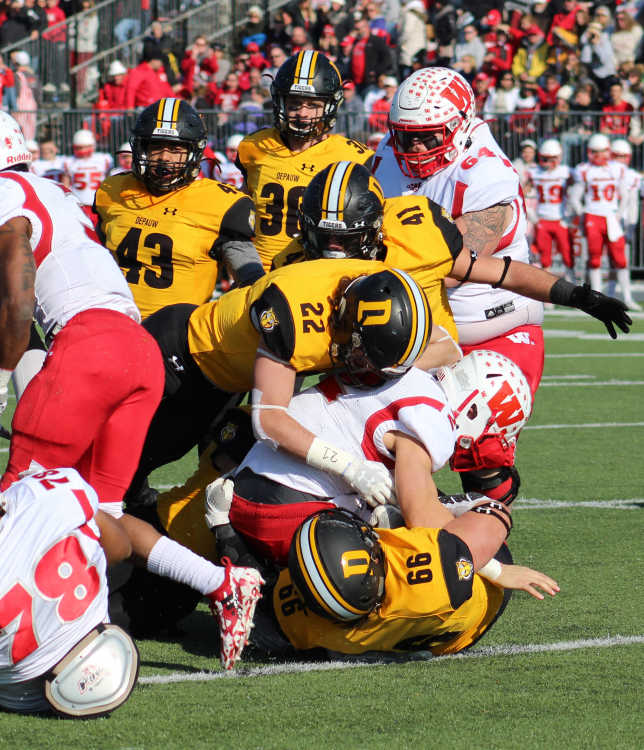 Sure, there are much better known college football rivalries around the country and even in this state, but there is just something about these two small schools in Western Indiana that evokes something other rivalries lack.

Am I biased about the subject? Absolutely. I spent four years metriculating at Wabash College and another four as purely a Wabash fan before I took a job here in enemy territory at the Banner Graphic and became more or less “neutral” in my view of the rivalry.

But I think I can confidently say that students at Alabama and Auburn, for example, don’t have the closeness to the game and the players that DePauw and Wabash students do. You cheer for your gridiron hero on Saturday, then come Monday he’s sitting with you in a class of 15 or so students, trying to decipher the same obscure passage from the “Epic of Gilgamesh.”

I’m sorry, Crimson Tide fans, but those instances are rare for you.

But while the rivalry itself is magical, the game is not always quite the same.

Quick, does anyone remember the 2002 game? Don’t lie to me. That game was trash, with Wabash handing DePauw a 35-7 butt whoopin’. I was there. It was cold. It was boring, even if my team did come out on top. I think I left early to drink beer somewhere warm.

How about 2008? Actually, you might remember that game. Wabash came in undefeated and favored only to have DePauw intercept four passes and score the first 30 points. The final score was 36-14 and it wasn’t that close.

My point is that not every Monon Bell Classic is a “classic.”

Remember the seven-game win streak Wabash ran off a few years ago? That was a stretch of really bad football games — average margin of victory: 27 points.

It got so bad, in fact, that I had spent the last several years worried that the rivalry might be dying, oblivious to the fact that since 2016, the games have all been pretty good.

I was worried as recently as last Thursday, when I drove around looking for some sort of “Beat Wabash” decoration on campus to feature in the next day’s paper. I found nothing.

“What’s wrong with these kids?” I thought. “Don’t they know how big this is?”

While I can’t explain what happened Thursday, I can tell you what I experienced on Saturday — nothing short of electricity.

It was not a game of big plays. The defenses ruled the day, mostly forcing punts or holding the opposing offenses to field goals. The only touchdowns of the first 59 minutes came via Wabash’s defense — a David Marsh 23-yard fumble recovery return — and DePauw running back’ Jarrod Stiver’s seven-yard second-quarter scamper.

And let me tell you, the Little Giants made Stiver and the Tigers earn every inch of that seven-play, 62-yard drive.

No one broke any plays, which only added to the sense that, eventually, something was going to happen and the place was going to explode.

I had all but given up that thought when Wabash took a 13-10 lead with 1:36 to play, believing a ho-hum 30-yard field goal would be the difference.

Then, five plays later, Chase Andries to Gavin Ritter happened. I’d been waiting all day for either coach to open up the playbook and Bill Lynch did it in a big way.

Andries placed his pass down the sideline perfectly and Ritter’s legs did the rest. Sure, he got caught by Wabash safety Artie Equihua, but he was able to stretch into the endzone and bedlam erupted on the DePauw sidelines and stands.

I looked up from the on-field celebration to see DePauw fans already crowding the field with 38 seconds to be played.

Something had, indeed, finally happened.

Sure, I’ve been to 21 Monon Bell games, but I can only think of a couple whose aftermath felt the way this one did — 2001 for Wabash and 2016 for DePauw come to mind.

“Wow, this was a classic,” I thought. “You don’t get these every year.”

It even had controversy. I can tell you that, as someone who was right there, Wabash’s Devon Anderson should have been awarded a touchdown late in the fourth quarter.

Then again, in that very same end zone two years ago, DePauw got the short end of a bad call when Wabash didn’t make it in on the game-winning two-point try.

I guess if you stick around long enough, the bad calls eventually go your way as well — unless you’re a Detroit Lions fan.

If you’re a fan of Wabash or DePauw, count yourself blessed. This rivalry is not dead or even sick. It’s a great tradition between two great schools.

We’ve been fortunate to have four straight games decided by seven points or less. That’s quite a streak. We should probably also be ready for a stinker in the next year or two, and that’s OK too.

As the fans rushed the field, I couldn’t help but feel a sense of joy for those around me. Despite my doubts, both sides have an amazing passion for this rivalry. Everybody wearing gold and black — players, coaches, students and alums — was just hungry to ring that bell.

Ring for ol’ DePauw, my friends. I know what that hunger is like.