Education reform must for next governor, Owens tell Democrats 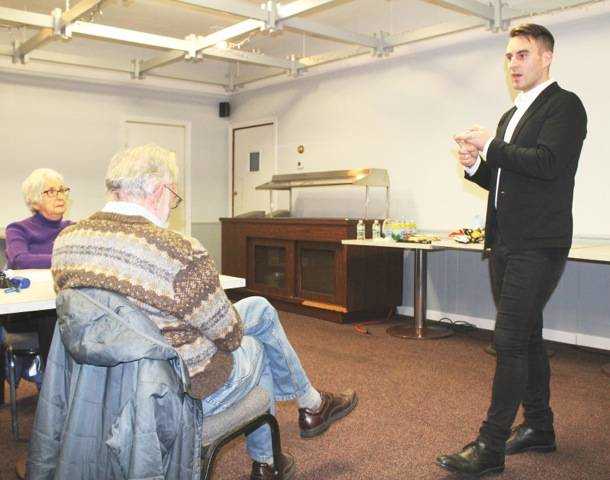 That was the word and topic of the day when 2020 Democrat gubernatorial candidate Josh Owens visited Putnam County Democrats Tuesday night at the Greencastle Elks Club.

The 34-year-old Owens is one of three Democrats jockeying for political position to face incumbent Republican Eric Holcomb (or Republican longshot Brian Roth) in November 2020. Fellow Democrat Woodrow Myers visited Greencastle earlier this fall and Eddie Melton, a state senator from Gary, is expected to make an appearance after the first of the year. 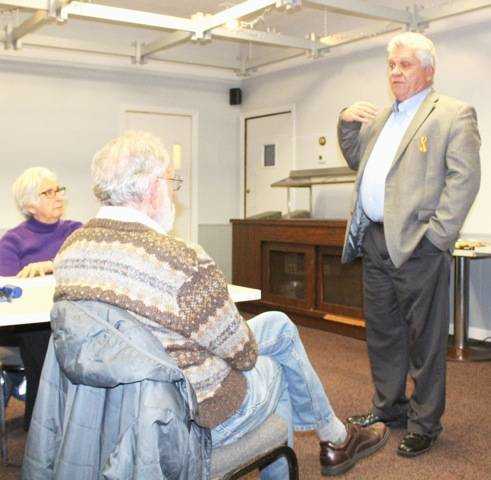 Addressing approximately two dozen Putnam County Democrats, Fourth District congressional candidate Joe Mackey of Layette urges the party to rally the troops with a “good ground game.” Mackey lost the nomination in 2016 when Tobi Beck of Avon emerged from the primary, only to lose to Greencastle Republican Jim Baird in November. To date, Mackey is the lone announced 2020 Democrat candidate.
Banner Graphic/Eric Bernsee
Order this photo

Education, Owens stressed, “is the issue that defines this election.”

“We have to make changes and we have to do it now. That’s exactly what brought me to this race.”

The same can be said for District 4 candidate Joe Mackey, a retired Lafayette machinist who lost the nomination to Democrat Tobi Beck of Avon in a 2016 congressional race ultimately won by Greencastle Republican Jim Baird.

Mackey addressed the party faithful following Owens’ appearance. Also speaking and stressing the education aspect of the campaign was Stan Albaugh, the Democrat candidate for State Senate District 24, a seat held by Republican John Crane of Avon. District 24 encompasses the northern half of Putnam County, including half of Greencastle, from the north side of Washington Street and on north.

Owens, the state’s first openly gay candidate for governor, said his education plans calls for phasing out the voucher program, which would put $160 million back into public education funding.

The Wabash College graduate, who has taught economics and statistics at both Butler and Indiana universities, said he attended the recent Red for Ed teacher rally at the Statehouse and came away inspired and supportive of “what education can be in Indiana.”

To get there, he enumerated a few points, which are outlined on his website at josh owens.com/education. Owens said he would:

• Create a minimum compensation package of $50,000 per year for all teachers in public schools in Indiana.

• Require school districts to enact annual cost of living increases for all teachers based on the prior year Indiana inflation rate.

Owens also addressed the disparity in public school funding. He stressed that all students in public education must be equally and fairly supported. If a school takes new students during the school year, that school should be supported with the funding needed to meet that student’s needs.

To reach those goals, Owens has vowed to require student funding be adjusted based on the monthly reported student count data and require that funding is backfilled for transfer students to ensure education dollars follow the student throughout the year.

Owens said he has been asked why he is running for governor. His simple answer is “Indiana is settling and I think we can do a whole lot better.”

Among what he sees in need of improvement are teachers’ pay and respect, health outcomes and how we think about the environment.

“Those are just examples of things we don’t prioritize in Indiana,” he said.

People have reminded Owens that “Indiana is a Republican state.” Republicans have been governor the past 16 years and his potential opponent, Eric Holcomb, friends and acquaintances suggest, “is a nice guy … and at least he’s better than Mike Pence.”

“We need to turn around the attitudes and reverse 16 years of the same, old policies, the same old leadership,” the candidate suggested.

Congressional candidate Mackey spoke from the same page in his brief remarks.

“We need to come together as Hoosiers,” he added. “I really hope the 2020 election is about all of us, not just some of us.”

State Senate hopeful Albaugh, who addressed education as well, noted that as the economy changes to a more knowledge-based economy, “the system we have is driving a much bigger wedge between the haves and the have-nots.”

Using the lack of availability of high-speed Internet in rural areas, Albaugh said, “We’re penalizing our rural residents” in regard to access to information.

He also noted that the “migration pattern (within the state) is being penalized and rewarded on opposite ends.”

In support of that notion, Albaugh, who listed education as his main platform, pointed out that Brownsburg added 20 pupils and received an extra $140,000 in school funding because of it. Meanwhile, North Putnam, he said in talking to Superintendent Nicole Singer, lost six students and took a $37,000 hit.

“Where she’s going to find that in her budget, she doesn’t know,” Albaugh added.

He noted that with the Republican Party leading Indiana, education went from being 68 percent of the state budget to 62 percent.

While that doesn’t sound like that much, Albaugh said, it represents $1.6 billion dollars, “and that’s a lot of money.”