Responders work against darkness and wet weather early Friday morning in response to an early-morning crash on Manhattan Road that sent a Reelsville woman to a Terre Haute hospital and damaged a Duke power pole.
Courtesy photo/PUTNAM COUNTY SHERIFF'S DEPARTMENT

An early-morning crash sent a Reelsville woman to a Terre Haute hospital and resulted in the closure of Manhattan Road for much of Friday morning.

At 3:08 a.m., 41-year-old Bernadette Powell was southbound on Manhattan Road near the entrance to Camp Friend when she apparently lost control of her vehicle on the wet roadway and left the driving surface.

The 2007 Chevrolet TrailBlazer continued off the edge of the roadway for 500-600 feet, according to Deputy Randy Patrick of the Putnam County Sheriff’s Department. 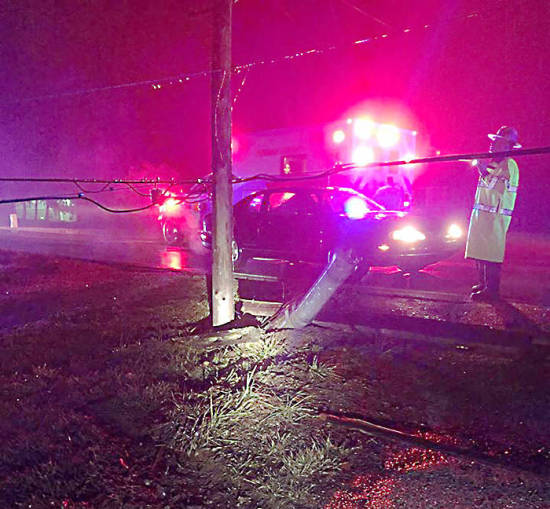 The SUV struck a Duke Energy power pole and a section of wood fence at 4670 S. CR 325 West, rolling over at least once in the process.

Duke Energy was called to repair the damaged pole that took down power lines.

The road remained closed until from 3:28 a.m. to 8 a.m. Duke later returned to the scene to set the new pole, closing the road again until after noon.

The TrailBlazer was towed by Seniour’s Towing. Patrick estimated material damages at $10,000-$25,000.