Caught Tuesday trying to pass drugs to a Putnamville Correctional Facility offender, a Grant County woman was arrested and lodged at the Putnam County Jail.

Katelynn Persinger, 30, was arrested after an Indiana Department of Correction investigation found she was allegedly trafficking into the facility.

On Dec. 31. Persinger entered the Putnamville Correctional Facility to visit Patrick Alexander. An IDOC news release states that during her visit, Persinger appeared to place an item onto a sandwich she had bought for Alexander. 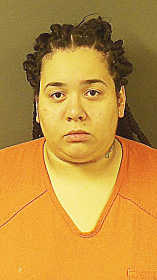 Investigators from the Office of Investigations and Intelligence then entered the visiting room and instructed both Persinger and the offender that the visit was over. Alexander was placed in restricted housing for observation and investigations while Persinger was escorted to the investigations office for questioning.

During this time, Persinger allegedly confirmed that she came into the facility to deliver 60 strips of suboxone.

Suboxone is a prescription medication used to treat opioid addiction.

Persinger was arrested and taken to Putnam County Jail on preliminary charges of trafficking with an offender and possession of a controlled substance.

“It is sad that individuals make a choice to put my staff and other offender’s health and safety in jeopardy. People do not understand the issues trafficking can cause within a facility,” Internal Affairs Lead Investigator James Smith said. “We have a zero tolerance policy on trafficking. We will arrest and seek prosecution against visitors who attempt to traffic illegal substances into any IDOC facility.”

Alexander, 33, is currently serving a six-year sentence for conversion and auto theft following a 2016 Hamilton County conviction. According to IDOC, his projected release date prior to the incident had been October of this year.