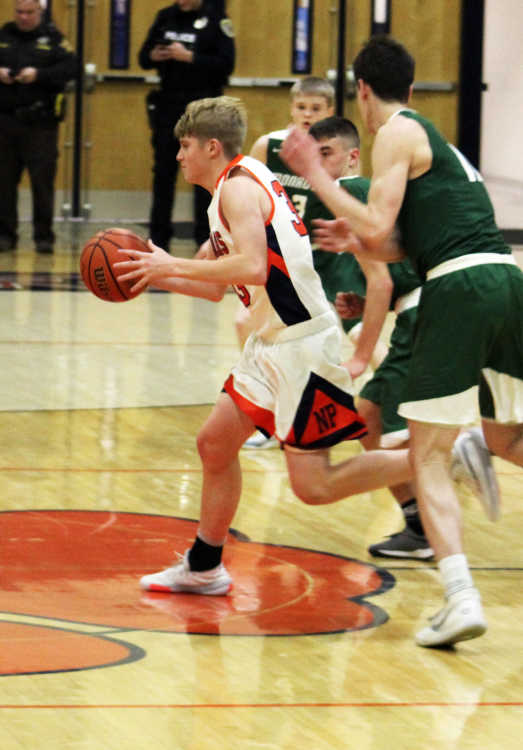 BAINBRIDGE — North Putnam’s boys’ basketball team recovered well for the first three quarters against Monrovia on Saturday night, on the heels of its emotional comeback win over county rival Greencastle on Friday night.

The Bulldogs had played a tough game the night before against Plainfield, but had more left in the tank and were able to pull off a 63-53 comeback win over the Cougars in overtime.

North led 10-8 after one quarter, getting consecutive treys from Zach Huff, Mason Brooks and Dane Spencer.

Josh Smith, Monrovia’s 6-fot-8 senior standout, picked up two fouls in the first 5:31 of the game and was limited to just a pair of free throws in the opening quarter.

Smith scored his team’s first three baskets of the second period before picking up his third foul in the final minute of the period.

North, meanwhile, got 12 second-period points from Brooks on its way to a 27-16 halftime lead.

A high-scoring third period saw Monrovia cut into North’s lead early in the quarter, with a Joe Williams basket brining the Bulldogs within 30-25.

North then got 10 straight points, on an “and one” play and a trey from Brooks, a pair of Huff free throws and an Aaron Pickel putback, to assume a 40-27 lead with 3:01 left in the period.

The Cougars would only get treys from Huff and Spencer the rest of the period, while Smith had eight of Monrovia’s 13 points as the guests cut the deficit to 46-40 after three periods.

Monrovia tied the game for the first time since it was 3-3 on a Williams putback with 1:50 left, which made the score 51-51.

North missed a one-and-one free throw attempt with 1:03 left, and while each team had possessions and opportunities in the final minute neither could break the deadlock.

The Bulldogs dominated the extra period by a 12-2 margin. Brooks, who had North’s final regulation bucket with 2:13 left, had the only North hoop in overtime.

Cougar coach Vince Brooks was proud of his team’s effort.

“We put together a game plan, and our kids just executed it so well in the first half,” he said. “We just did a great job. I’m looking forward to going back and looking at the film to see what the kinks were in the second half. Obviously it was rebounding as a big part of it, and we gave them some extra opportunities.”

Brooks thought that sometimes the ball just “bounced their way a couple of times,” whether his team saved a ball going out of bounds right to the Bulldogs or other loose balls.

“They are a great team,” he said of the Bulldogs, who improved to 11-3 with the win. “This was a big deal for us to play so well against such a great team, especially in the first half. I’m just disappointed that we didn’t handle the lead extreme well, and we got a little tight. Or maybe we got too loose.”

The Cougars knew they had a daunting task coming into the weekend against two defending sectional championship squads which returned most of their best players.

“Greencastle and Monrovia are two very good 3A teams that we know are going to be two of the toughest teams on our schedule,” he said. “To have the lead that we had was very impressive. These kids are so smart, and they are incredibly adaptable.

“That was the first time we did some of the intricacies that we did,” Brooks added. “We threw some new things at them, and I was amazed at how well they caught it from an hour of preparation before the game. It really shows how smart they are, and it’s going to be another tool for us to get better and get sharper.”

Smith had 19 points to pace the Bulldogs, while Todd Camic added 11.

North shot just 37 percent from the field, while Monrovia was just shy of .500 at 49 percent.

Pickel led North with six rebounds, as Monrovia controlled the boards by a 31-21 edge. Brooks had four assists and Huff had three for the Cougars, while Huff had two steals.

The Cougars had evened their record at .500 with the win over Greencastle on Friday, and look to return to that mark as they host Cloverdale on Thursday and defend the “bucket” for the first time this year.