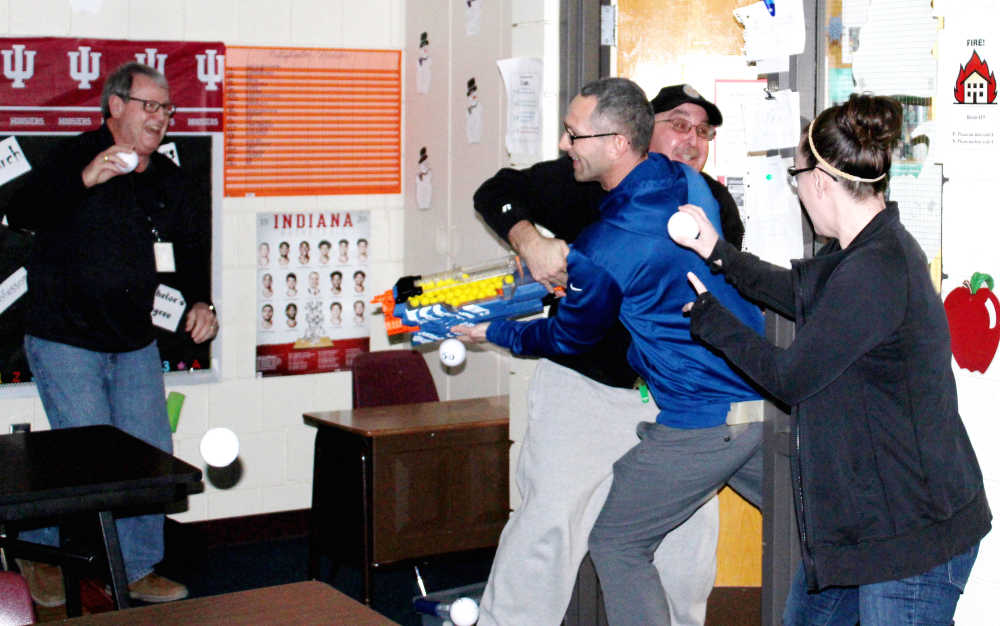 This mindset set the tone for teachers at Cloverdale Schools as they prepared not to just mitigate an active shooter situation, but to give them and their students the best possible chance to survive.

Staff and administrators from all three schools in the district took a professional day off on Friday to conduct training with ALICE, a program which addresses how to be proactive when faced with such a scenario. 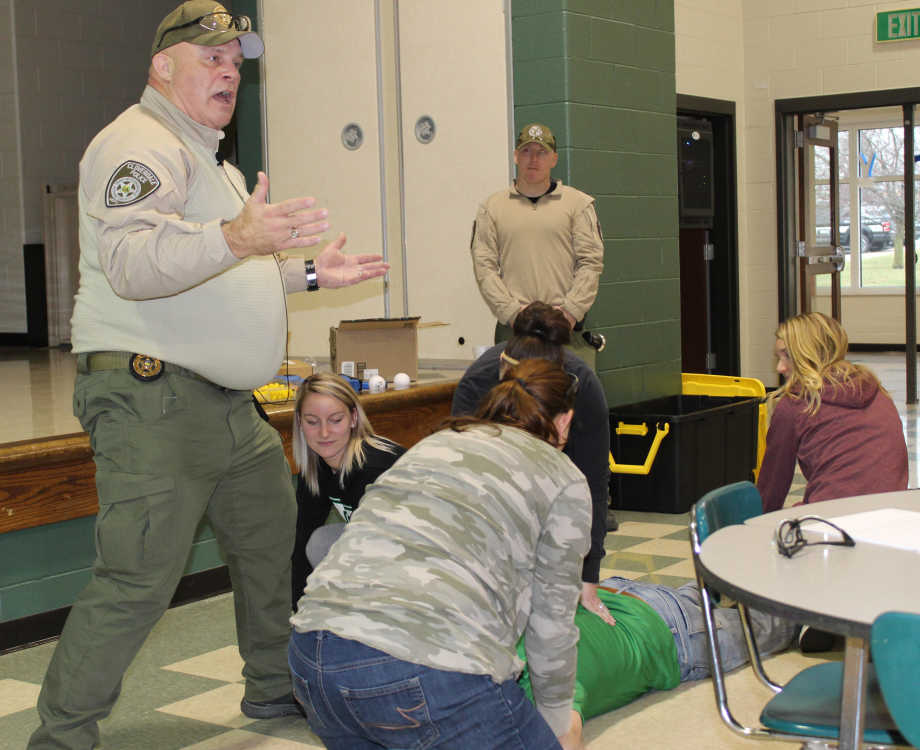 Town Marshal Steve Hibler supervises an exercise showing how an intruder can be taken down and secured by a group.
Banner Graphic/Brand Selvia
Order this photo

ALICE, which stands for Alert, Lockdown, Inform, Counter and Evacuate, is a five-step guide to alerting of a danger, securing in place, communicating an intruder’s location, countering the assailant by distracting them and evacuating the space.

ALICE is not just specific to schools, as government agencies, houses of worship, businesses and health car facilities also participate. The program has more than 31,800 certified instructors with more than one million people trained.

The exercises at Cloverdale were supervised by Town Marshal Steve Hibler and Officer James Collings, who is the student resource officer (SRO) for the school corporation.

Staff previously completed an interactive online course which detailed how the scenarios would be played out in the actual training.

Before the sessions got under way, Superintendent Greg Linton understood the anxiety about the prospect of a school shooting in a time when it has become prevalent nationwide. However, he said it was imperative to prepare for the worst.

“I know this is not a comfortable topic that educators like to talk about,” Linton said. “We have an obligation to do everything we can to make sure we keep ourselves and our students safe.

“The positive is that we can address it now, and that’s why we’re doing this today,” he told everyone.

Linton pointed out that Cloverdale has had an SRO for the past two years, and highlighted the collaborative efforts between the school corporation and the Cloverdale Police Department.

“The marshal and the department have been critical in getting this training set up, and we are fortunate to have a police force which sees us as a community partner,” he said.

Hibler provided that the average time for a police force to respond to an active shooter situation is five to six minutes, though some scenarios have found the response time to be as much as 20 minutes.

The town marshal highlighted various shooting scenarios where the “traditional” response to a shooter situation was to stay in place and wait for law enforcement to arrive.

Hibler specifically referenced the 1999 mass shooting at Columbine High School, where groups of students and teachers went on lockdown and hid under tables, even though there were various points of escape.

He also pointed to the 2006 shooting of a one-room schoolhouse in the Amish community of Nickel Mines, Pa., to drive home the importance of being able to counter such an attack.

“You are the first responder here,” Hibler said. “ALICE is designed to empower you all to take action to protect yourselves and your kids.”

Hibler said that people have three natural reactions to stressful situations: Either to fight, to flee or to freeze. As such, the point of the ALICE program is to give teachers and staff the freedom to act as the situation may demand.

The first exercise was the traditional lock-in-place method (including turning off the lights). Groups of staff were relegated to different rooms, with a mock shooter going to each of them with a Nerf gun.

This scenario, which took about five minutes, saw almost everyone getting hit. As the groups debriefed with Hibler and Collings, one teacher said she felt like a “sitting duck.”

The next scenario acted out saw the groups fleeing the classrooms at the sound of an alarm. Even in the chaos which ensued, the number of people who were hit was reduced to a couple of staff members.

“The bad guys are crazy, but they’re not totally stupid,” Hibler said, relating that the intruder in a school shooting scenario would be unwilling to directly confront a stress situation themselves.

He touched on throwing off the shooter’s “OODA (Observe, Orient, Decide and Act) loop,” meaning that the assailant’s focus on a target can be distracted. Yelling is one such deterrent, as was demonstrated in the fleeing exercise.

The groups’ overall confidence in taking control was heightened coming into the last two scenarios, which emphasized barricading entryways as well as directly confronting the shooter.

The groups threw Nerf balls at the mock shooter in the last exercise, though objects such as staplers and coffee cups are certainly not off-limits in a real-life situation. No one reported being hit in this or the barricading scenario.

“If you put up resistance at the door, they’re going to want to move on,” Hibler said in the last debrief. “I hate to put it this way, but they’re looking for how many they can kill quickly before we get there.”

The marshal emphasized that real-time communication was essential. Principal Sonny Stoltz, who is also Cloverdale’s school safety officer, shared that he and other school officials are working to set up a phone app for teachers which immediately alerts law enforcement.

Linton told the Banner Graphic that Cloverdale Schools has emphasized school safety with recently-updated camera systems and improved door access, as well as investing in an SRO. However, he added that the tools and procedures teachers can use need to always be available.

“We want to have consistency between the buildings in the district, and we’ll work on this in the future,” Linton said. “The important thing here is for everyone to be aware of their environment and surroundings.”

Linton assured that new hires who have not completed the online course, as well as those who could not attend the sessions, will be trained prior to the start of the next school year.

The superintendent added that students and parents will soon be briefed on the ALICE program in special community meetings, which will take place at a later time.