Not guilty plea, no bond for Gonzalez 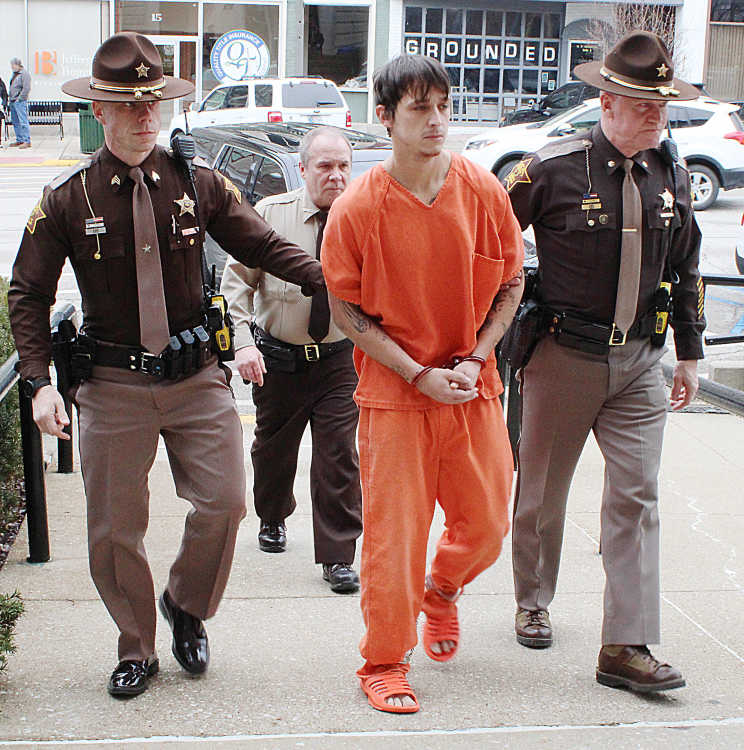 Due in court for an initial hearing on murder and other charges Monday afternoon, John Gonzalez is escorted into the Putnam County Courthouse by Sgt. Riley Houghton (left) and Maj. Dwight Simmons (right) with assistance from Courthouse Deputy Jerry Campbell. Gonzalez is accused of killing Melissa “Lisa” Attkisson at her south side home in late January.
Banner Graphic/Jared Jernagan

Amid a heavy law enforcement presence, a Terre Haute man made his initial appearance in Putnam Superior Court on murder and other felony charges Monday afternoon.

Before the judge entered a not guilty plea on the defendant’s behalf, Bridges read the charges, outlining the penalties for each should he be found guilty.

Murder carries a sentencing range of 45-65 years. Meanwhile, the other two charges against Gonzalez — auto theft and theft of a firearm — are both Level 6 felonies, carrying a range of six months to 2.5 years.

Putnam County Prosecutor Tim Bookwalter has also filed a habitual offender enhancement, which could add between six and 20 years to the sentence.

Should he be found guilty of all charges, Gonzalez potentially faces a sentence of up to 90 years in prison.

Gonzalez said he had not spoken to an attorney, so Bridges appointed public defender Jim Hanner to represent him.

The first pretrial conference in the case was set for 10 a.m. on March 25.

Probably the most notable thing about the proceedings was the level of security for Putnam County’s first murder charges — outside of three cases at Putnamville Correctional Facility — since 2012.

Aside from the usual courthouse security deputies and bailiffs, Gonzalez was escorted at all times by two sheriff’s deputies, with an additional deputy, two Greencastle Police Department officers and four detectives from the two departments all in the courtroom.

Another deputy and a probation officer helped oversee the scene as Gonzalez was transported into and out of the building.

That case, however, has never made it to trial, with several continuances requested by the prosecution.

Last September, Gonzalez was released from the Department of Correction, but was not taken into the custody of the Vigo County Jail.

He subsequently took up residence in Greencastle with Attkisson, whose body was found at her home on Jan. 28, with her car and several other items missing.

Rock Island County, Ill., sheriff’s deputies located Attkisson’s wrecked vehicle six days later on Feb. 3, with Gonzalez walking down the road nearby, with several of the victim’s missing items in his possession.

He was taken into custody without incident on a Vigo County warrant for probation violation in the sexual battery case.

With no bond in the case, Gonzalez will remain in the custody of the Putnam County Sheriff’s Department awaiting further court dates.