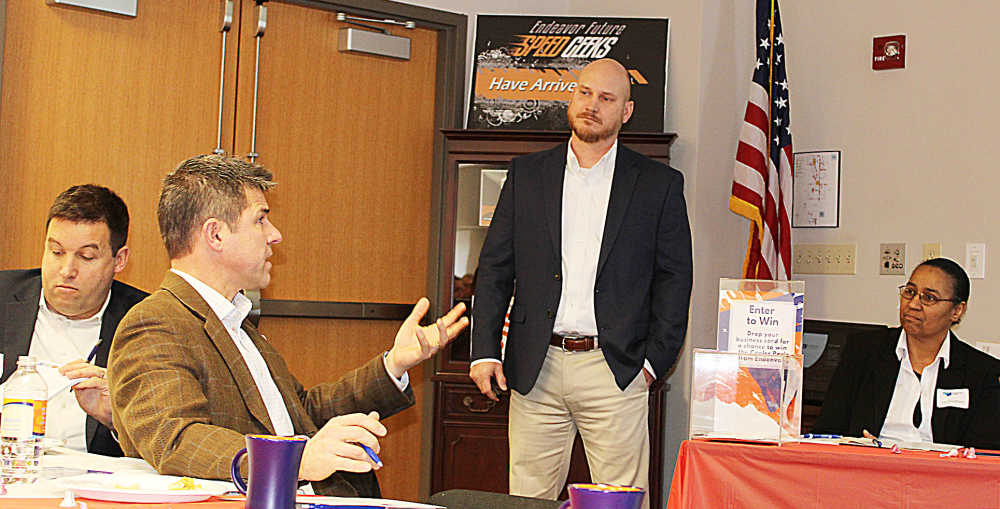 CLOVERDALE -- What began as a rural telephone cooperative 70 years ago has become an endeavor bringing broadband to the heartland.

Recently growing from 69 employees to 85 because of the success of its GigTel advanced communications solutions effort, a platform that is being taken nationwide as it “continues to grow throughout the state and the country,” Endeavor Vice President of Operations Justin Clark told the gathering.

“The next 10 years or so are going to be very lucrative and very defining for rural broadband,” Clark suggested.

And currently “little, old Cloverdale, Ind., is the 55th fastest city in the country,” he added.

Since 2005, Endeavor has invested more than $90 million and placed 2,500 miles of fiber in the ground to facilitate its growth.

Endeavor is working on a grant, Clark said, to widen its presence in Hendricks and Putnam counties, with the designed project to pass 1,100 locations, much of which was formerly TDS territory, Clark said.

State Sen. Rodric Bray (R-Martinsville) had plenty of praise for the rural Indiana company that is working to bring broadband to the heartland.

“Endeavor,” Bray said, “is a shining example of putting in rural broadband across the state.”

“One of our areas of focused is rural broadband access,” Clary said. “Endeavor Communications is a company focused on this initiative. They have come a long way from a rural telephone company to a powerhouse in rural broadband.”

Clary also took a few moments during her remarks to explain the term economic development.

“First and foremost,” she said, “our main objective it to support our local industrial companies, either manufacturers like Crown, Lonestar IAC, Heartland and Chiyoda or distributors like Ascena and Walmart Distribution. It is they who pay a large portion of our real estate taxes, both real and personal, as well as hire many residents who play local income taxes, both for PTRC through CAGIT and public safety and EDIT taxes

”Our other contributors are largely those industrial companies we serve, as well as utilities that rely on those customers where they supply their energy and needs when growing their business. In focusing on those companies, we try to meet the current needs they express, as well as anticipate new needs that may arise.”

Attraction of new business is also a part of the equation, she said.

“And to be honest,” Clary said, “we simply cannot ensure that there are enough people willing to work at new business ventures when many of our existing large employers struggle with finding qualified employees.

“That is why we meet monthly with a group of educators and employers to discuss way to solve this community need,” Clary concluded.

In other business, the Development Center Board:

-- Heard Clary announced that the Putnam County Leadership Academy is being restarted with a class of 14-18 participants expected this fall.

“We are bringing on someone with broad leadership experience who is the current president of the Indiana Leadership Association, Lynn Ringis,” she said.