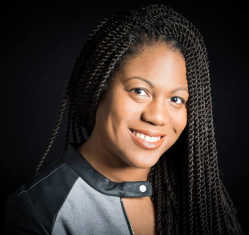 The Center for Spiritual Life at DePauw University will welcome author and lecturer Austin Channing Brown for the annual Mendenhall Lecture on Tuesday, March 3.

The 7:30 p.m. lecture is free and open to the public, and will be held at Gobin Memorial United Methodist Church.

The lecture will touch on “how white, middle-class, Christian evangelicalism has participated in an era of rising racial hostility, and how we might confront our own apathy, recognize God’s ongoing work in the world, and discover how blackness — if we let it — can save us all.”

Channing Brown is considered a leading figure in racial justice causes, and her 2018 Amazon bestselling book “I’m Still Here: Black Dignity in a World Made for Whiteness” has received acclaim from Kirkus Reviews, Publishers Weekly and Booklist.

She worked for nonprofits that focused on homelessness, youths, fundraising and the ministry before turning full time to writing and speaking. She is co-creator and the executive producer of “The Next Question,” a video web series about racial justice.

“Channing Brown’s work aligns with both the core values of our institution and the intention of the Mendenhall Lecture, encouraging us to see diversity and inclusion through the lens of faith,” said the Rev. Dr. Maureen Knudsen Langdoc, university chaplain and associate dean. “Her work not only illuminates the ways in which white, middle-class evangelicalism has participated in racial hostility, but also gives voice to hope. We are honored to have her deliver this year’s Mendenhall Lecture.”

The lecture series traces back to 1905, when the Rev. Dr. Marmaduke H. Mendenhall endowed it to bring scholars and advocates to campus to discuss broad issues related to Christianity.

This lecture is supported by the Bishop Matthew Simpson Endowment and the Kerrilla Beamer Fund.

Comments
View 40 comments
Note: The nature of the Internet makes it impractical for our staff to review every comment. Please note that those who post comments on this website may do so using a screen name, which may or may not reflect a website user's actual name. Readers should be careful not to assign comments to real people who may have names similar to screen names. Refrain from obscenity in your comments, and to keep discussions civil, don't say anything in a way your grandmother would be ashamed to read.
Respond to this story