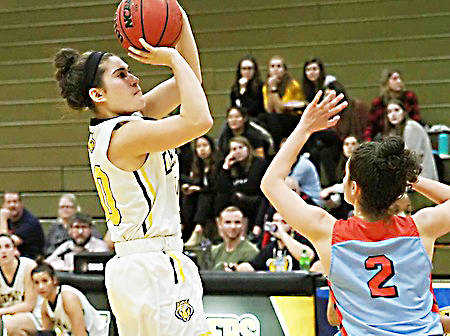 Sydney Kopp eyes two of her game-high 30 points Tuesday against Hiram. The senior led the No. 3 Tigers to an 89-48 win over Hiram and into the NCAC semifinals, which DePauw will host on Friday.
Courtesy photo

Led by Sydney Kopp’s 30-point performance including 27 in the first half, third-ranked DePauw advanced to the North Coast Athletic Conference Tournament semifinals following an 89-48 quarterfinal win over Hiram Tuesday.

The Tigers improved to 25-1 with their 21st straight win, while the Terriers concluded their season at 7-19.

DePauw, the top seed in the tournament, hosts the NCAC semifinals for the eighth time since beginning conference play in 2011-12 and will face fourth-seed Ohio Wesleyan at 5 p.m. on Friday, Feb. 28. The Battling Bishops defeated Allegheny, 78-60.

Hiram got out to an 8-2 lead in the opening three minutes. Kopp, who missed her first three shots, made her final four of the opening quarter including a jumper just before the horn sounded, giving the Tigers a 17-16 lead at the quarter break.

Claire Keefe’s layup followed by a Kopp three-pointer capped a 7-0 DePauw run and gave the Tigers a 22-16 lead. After Hiram closed the gap to four, Kopp scored the Tigers’ next 13 points to push the DePauw lead to 37-23 with 3:17 remaining in the half.

Hiram countered with a bucket before the Tigers scored the final seven of the half for a 44-25 advantage at the intermission.

Kopp’s 27-point half was the most by a DePauw player in a first half and second only to her 30-point second half at Ohio Wesleyan earlier this season.

In addition to Kopp’s 30 points, Keefe added 14 followed by Mya Shannon with 13 and Grace Kinsey with 12.