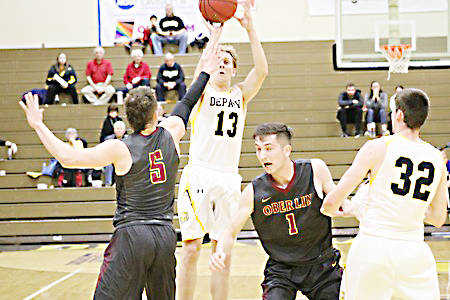 The DePauw University men’s basketball season was cut short Tuesday after falling to the Yeomen of Oberlin College 63-75 in the North Coast Athletic Conference Tournament quarterfinals.

From tip-off, the Yeomen played with energy, flying around the court, stretching the Tigers defense, and finding success in both the paint and around the arc early in the matchup.

Down 0-7 in the first four minutes of the game, DePauw finally began to chip away at Oberlin’s lead after both Aaron Shank and Nolan Ginther put in back-to-back baskets in the key.

Though the Tigers strung together a couple of baskets, by the end of the first half, DePauw was down by 34-27 and had only shot 36 percent from the field, while the Yeomen finished with a field goal percentage of 56.5.

In the second half, the Tigers managed to get within one point of Oberlin, but each time DePauw drained a three, the Yeomen would answer with a basket and a stop of their own.

Despite having a quiet first half across the roster, DePauw finished the game with Ginther, Nick Felke, and Ken Decker in double digits. Unfortunately for the Tigers, the burst of energy in the final five minutes of the game wasn’t enough to slow down the Oberlin offense.

The Tigers battled to the end, but the combination of being out-rebounded 27-40 and getting beat off the fast break kept the game out of reach for DePauw as the half came to a close.