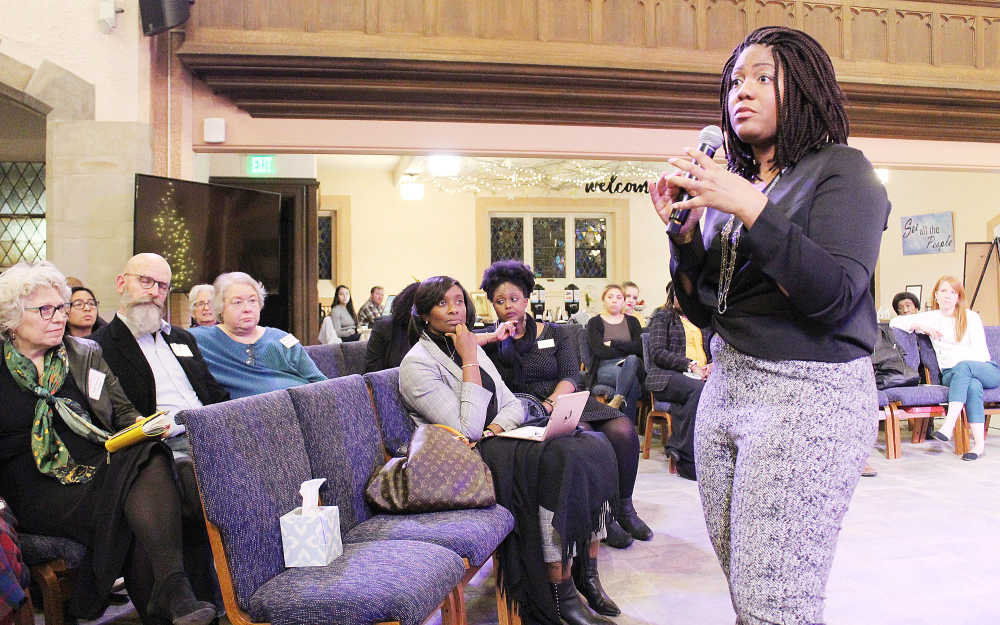 Promising not to pull any punches, Austin Channing Brown has a style of speaking that is honest, engaging and, perhaps to some, uncomfortable.

However, she would say this is part of the point in confronting racism and prejudices of all kinds.

She held to this style and purpose when she visited DePauw University to give the annual Mendenhall Lecture in Gobin Memorial United Methodist Church Tuesday evening.

Brown is also a co-creator and the executive producer of “The Next Question,” a video web series that tackles issues related to race.

“Sometimes when we come to really diverse places like this, we default to whiteness,” she said up front. “If I’m silent, I’m not saying anything.”

She first provided anecdotes reflecting back on her childhood, when she said she was just trying to understand how race figured into society.

Brown said she came to three conclusions then: Her hair was different, white people loved cats and she wasn’t supposed to eat white people’s food.

She based the second realization on a childhood sleepover where there were 12 of them, because at least one had kittens. The third, she said, was because there was a difference between yams and sweet potatoes.

Brown later considered these to be “miscommunications” between her and the white world she lived in.

She said she encountered the same issue because of her name. When she asked her mom why her name was Austin, she said that her parents “just wanted to make sure (she) made it to the interview.”

She suggested that African Americans, especially children, and their cultural differences not being acknowledged is “deeply impactful” when it comes to social acceptance.

“People of color have to be protective of their dignity,” Brown said, referring to these as examples of interpersonal experiences of prejudice. “Oftentimes, children of color just have to catch up.”

The greater part of Brown’s lecture was the idea that racism exists on both this interpersonal level as well as a wider systemic level.

She pointed to exclusively black and white schools, which to her implies a segregation that, in turn, promotes negative stereotypes about African Americans.

Brown believed this type of separation, especially in terms of poverty and society, encourages a narrative that black children and parents don’t care about school or work, or that they don’t have the “grit” to succeed.

“This narrative allows us to stay comfortable with racism,” Brown said. “It underlines every system of injustice.

“The reason we have to get to the root of white supremacist systems is not because I want you to feel guilty,” she emphasized, “it’s so you can uproot it. Racism implies that there is no dignity to protect.”

In essence, confronting these institutional prejudices is not just what her story is about, but what the whole idea of bridging racial divides is about.

“Do we have inherent dignity?” Brown asked further. “If we do, then injustice should become intolerable.”

A local teacher shared that she educates students who are prejudiced in different ways, and asked how she could begin to change their outlooks.

Brown responded that she, and all teachers, needed to figure out who is on their side in fighting against racism and hatred.

“It is a lot harder to resist a group than it is a person,” she said. Brown also suggested that teachers had to be more thoughtful in how they approached change. This meant getting more creative.

She specified that teachers can broaden students’ views by incorporating African-American literature into curricula. More on the college level, experiences like studying abroad, as well as just being away from home, also challenge those prejudices.

Brown provided that a “false idea” exists about how racism and injustice become institutionalized. It is assumed that people already inherently possess that prejudice, and then act on it to introduce discriminatory policies.

She countered that the way injustice operates is different. Rather than internal prejudices influencing their creation, such policies are introduced to push negative stereotypes or narratives, which then promote fear.

The point, Brown said, is that policies which are rooted in or inspire racism and injustice have to be undone at the beginning.

“It’s about the big picture here,” she said. “That causes heart change, because the narrative can’t stand in the middle. Your job should be as planting seeds to discourage that narrative.”

A student then shared how he had felt that he was treated differently as the only white player on a basketball team. He also recounted an incident where he was able to get between his black friends and police.

Brown commended his actions, as well as his seeming awareness that his being white could help his black friends in situations which could turn violent or even deadly.

She said African Americans needed advocates and allies, but took this further that everyone needed “accomplices.” This means being more active and wholehearted in defending others, as well as lifting them up.

“What people of color need to ask is, ‘What is it that you need?’” Brown adamantly said.

“Please begin to expect that,” she said in earnest to everyone in the audience. “You deserve allyship; you deserve friendship.”

Ultimately, Brown suggested that a root cause of racism in America was a belief that something was “broken” with African Americans in society.

“I may be broken, but I’m not broken because I’m black,” she said defiantly. “The problem is with how we treat black people, not with blackness.”