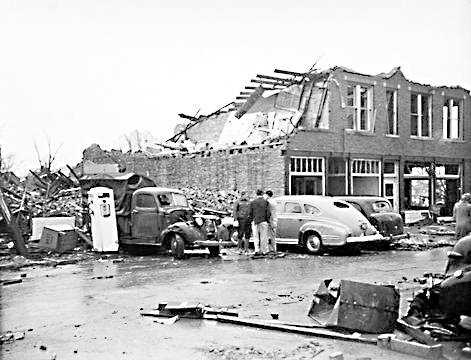 One of the most devastating tornados to hit the area, the 1948 Coatesville Tornado left quite a path of destruction, inflicting destruction in the western Hendricks County town and also damaging more than 40 Putnam County farms.
Courtesy photo

Lost among the seemingly endless coverage and debate over the coronavirus, is that tornado season has arrived in Indiana.

So not only do you need to wash your hands, stay six feet away from the nearest person and hunker down at home, you also need to keep your eyes on the skies.

Annually the National Weather Service bombards us with information about Severe Weather Preparedness Week, which last week disappeared among an avalanche of COVID-19 activity. 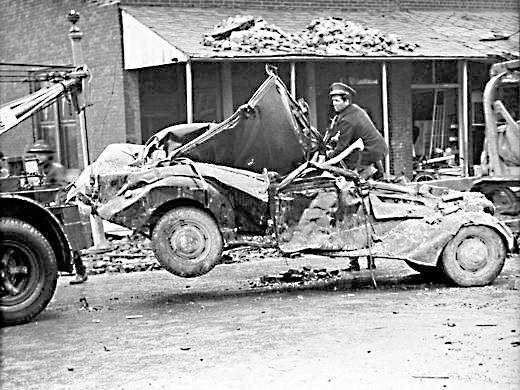 One of the most devastating tornados to hit the area, the 1948 Coatesville Tornado left quite a path of destruction, inflicting destruction in the western Hendricks County town and also damaging more than 40 Putnam County farms.
Courtesy photo

Even the scheduled tornado siren testing, slated for last Wednesday, was canceled.

But we are now in tornado season – peak season for which is described as spring through early summer with a secondary season in the fall.

And rest assured, virus or no virus, Mother Nature has another threat in store for us.

To drive that point home, this week marks the anniversary of one of the deadliest tornadoes in Indiana history.

Most often referred to as the Coatesville Tornado, the March 26, 1948 storm killed 19 people across three counties and reportedly ravaged more than 40 Putnam County farms.

After an initial touchdown near Clay City that Good Friday evening, a woman southeast of Asherville in southern Clay County was the storm system’s first casualty as it moved eastward and picked up intensity about 5:10 p.m.

With weather forecasting in its primitive stages in the 1940s, most local residents were unaware of the storm bearing down on them that evening.

After it roared across Putnam County, causing severe property damage but no loss of life, the funnel had grown to a half-mile wide by the time it reached Hendricks County. There it swallowed up the town of Coatesville, where 14 people were killed and 150 injured in a community of 500.

More fatalities occurred north of nearby Amo, on the south edge of Hadley and at Danville.

The National Weather Service believes a family of tornadoes created the havoc over a 40-mile path, injuring hundreds in communities across Clay, Putnam and Hendricks counties.

After leaving Coatesville, the funnel leveled the tiny Hendricks County town of Hadley, then severely damaged homes on the west edge of Danville and finally blew itself out on the northwest side of Indianapolis.

“As the giant demon roared out of town, Coatesville was reduced to rubble,” the Coatesville Herald reported following the disaster. “The giant trees which had beautified the town had been picked up by the tornado, roots and all. Everything you could imagine was jumbled into one huge mass.”

Power lines were down all over town and most of the vehicles in town were trapped under piles of rubble, leading to a long delay in calls for help to the outside.

After some time, some of the men in town were able to free a pair of cars from the town’s funeral home and use them to transport injured residents to Putnam County Hospital, which at that time, was on Shadowlawn Avenue on the north side of Greencastle.

Thankfully, nothing like that has struck the area since, although the last big tornado outbreak in central Indiana occurred Aug. 24, 2016 with 22 tornadoes confirmed but Putnam County dodging the proverbial bullet.

All of which begs the question: How often does Putnam County actually experience a confirmed tornado?

The answer is rarely, surprisingly enough, according to Indianapolis office of the National Weather Service (NWS) records.

In fact, those NWS records list only 20 tornadoes as confirmed in Putnam County between Jan. 1, 1950 and the present. That’s 20 twisters in 70 years.

The last significant Putnam twister occurred July 8, 2003 near Bainbridge. That was the storm that did substantial damage to the Mark Timm residence and other structures along and around U.S. 36 on the west edge of Bainbridge.

Overall, Weather Service figures show the 20 reported Putnam tornadoes responsible for $4.015 million in total property damage, causing one death (June 2, 1990) and 10 injuries (seven of which came in a May 10, 1969 twister).

Meanwhile, the latest official tornado to strike within Greencastle city limits was reported Aug. 23, 2002 when the storm caused an estimated $200,000 damage.

Available tornado figures from the NWS also list the time of day the twisters were reported:

• Four times twisters have struck locally between 1 and 2 p.m.

• Overall, the numbers average out to make 2:27 p.m. the most likely time for a Putnam tornado occurrence.

Meanwhile, March 20, 1976 was the earliest date for a tornado to strike the Putnam County area, while the latest twister reported in any year since 1950 was the Dec. 11, 1967 storm.

One storm not included in the list is the devastating August 1990 Downburst that struck Greencastle, uprooting dozens of trees and causing the fire that destroyed the Presbyterian Church on College Avenue. The NWS later determined it to be straight-line wind damage.