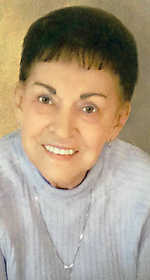 Loretta M. Slater, 88, passed away Friday, March 27, 2020 at Asbury Towers in Greencastle after an extended illness.

Loretta attended Brazil High School, and worked for many employers in the area, including Columbia Records and Mallory’s, as well as several healthcare facilities and home healthcare.

Loretta was a workaholic who was known for her cooking, complaining and her colorful personality.

She was preceded in death by her brothers, Forrest Jr., Bernard and Robert Lee Johnson; her sister, Mary Ruth Cox; and her grandson, Jordon Slater.

A graveside service will be held at Croy’s Creek Cemetery at a later date.

Online condolences for her family are encouraged to be left at www.moorefuneralhomes.com.