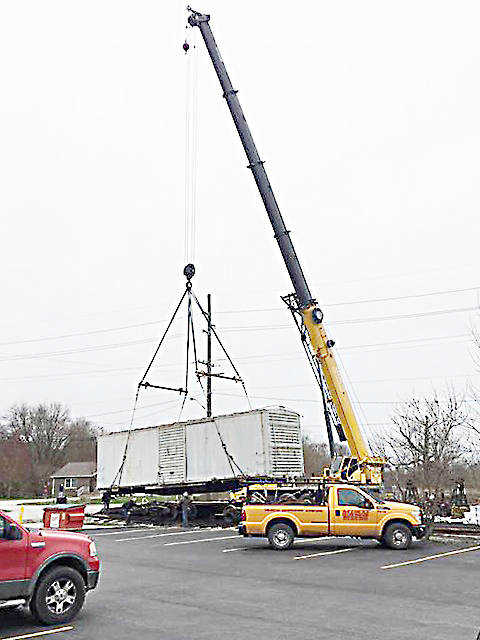 A nearly 100-year-old boxcar is lifted from the Greencastle location where it has been used for storage the past 55 years. It was moved Tuesday to the Wabash Valley Railroad Museum in Terre Haute.
Courtesy photo

The Wabash Valley Railroad Museum (WVRM) has teamed up with CSX Transportation to preserve a 98-year-old boxcar, moving it from Greencastle where it has been used for storage the past 55 years.

Boxcar NYC 155524 was built by American Car and Foundry (ACF) in 1922 for New York Central Railroad subsidiary CCC&StL (Big Four) as an auto-box car with a steel underframe, wood side sheathing and 10-foot double doors.

NYC 155524 entered maintenance of way (MOW) service in 1965, was renumbered as NYC X-40947 and placed near the New York Central depot, off Depot Street in Greencastle where it was used for storage.

The car was destined to see a scrapper’s torch when the Wabash Valley Railroad Museum inquired about saving it. CSX subsequently agreed to donate the car to the WVRM.

The Haley Tower Historical & Technical Society, which owns the Wabash Valley Railroad Museum is soliciting donations to offset the $15,000 cost to move the car and construct track to display it. Tax-deductible donations are being accepted at www.wvrrm.org or by mail at: Haley Tower Historical & Technical Society, P.O. Box 10291, Terre Haute, IN 47801.

Founded in 1999, The Wabash Valley Railroad Museum, located at 1316 Plum St. in Terre Haute is operated by the Haley Tower Historical & Technical Society, a 501(c)(3) corporation.