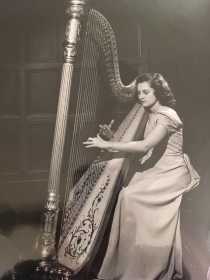 Bernice Flanagan Grubb passed away peacefully on Saturday, March 28, 2020 at the Mill Pond Health Campus in Greencastle. She was 94.

She will be long remembered as a loving wife, mother and friend. Whenever she was asked how she was doing, her response was always “I’m doing just fine!”

Bernice was born on July 29, 1925 in Evanston, Ill. She was the daughter of James and Bernice Flanagan.

She was a graduate of Highland Park High School in suburban Chicago. She then attended the Eastman School of Music in Rochester, N.Y., where she received a Bachelor of Music degree. Upon graduation, she was awarded the Performance Certificate in harp and appeared as a soloist with the Rochester Philharmonic Orchestra.

Her teaching career started at Del Mar College in Corpus Christi, Texas. While in Texas, she was also a harpist for several orchestras, including the Corpus Christi, San Antonio and Houston Symphony orchestras.

On Dec.26, 1948, she married Cassel Grubb. In the fall of 1949, they moved to Greencastle and began their 40-year teaching career at the School of Music at DePauw University. During the summer months they also taught at the Interlochen Center for the Arts.

Bernice was a member of St. Paul’s Catholic Church, the St. Paul’s Ladies’ Guild, Tri Kappa Sorority, Tuesday Reading Club and the Putman County Hospital Guild. As a volunteer at the hospital, she was a Cheer Cart lady.

She is survived by her three sons, Bill and wife Laurie Carney; Jim and wife Maura; Tom and wife Betty, who proclaim they could not have asked for a more loving mother. She also had five grandchildren and one great-grandchild.

A Celebration of Life service will be scheduled at a future date.