No one injured in Monday barn fire 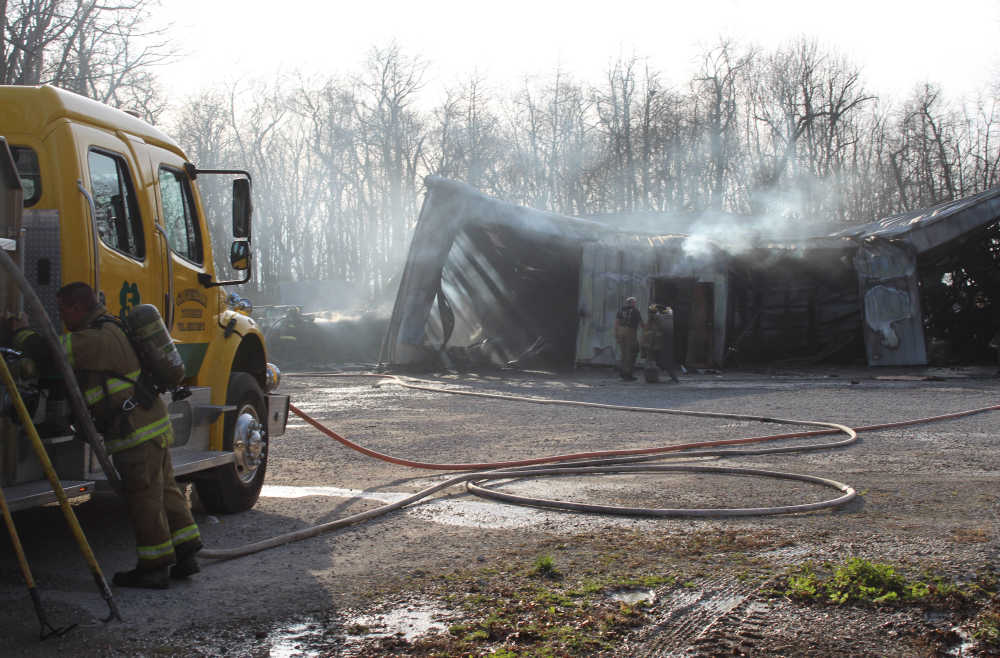 Fire crews survey the remains of the barn, in which different kinds of ammunition were being stored.
Banner Graphic/Brand Selvia

CLOVERDALE -- Effectively all fire personnel in Putnam County came out Monday evening to help contain a fire which burned down a steel barn east of Cloverdale.

A potentially dangerous element to this run was that ammunition stored inside was exploding in the process.

At approximately 5:10 p.m., the Cloverdale Township Fire Department responded to an alarm for the fire, which was located at 6679 E. CR 1000 South. A full box alarm alerting the other area fire departments then went out.

In addition to Cloverdale’s team, firefighters from the Greencastle, Madison Township, Jefferson Township, Fillmore, Cataract, Reelsville and the Putnamville Correctional fire departments responded to the blaze.

Besides GFD and the Cataract force arriving with engines, each of the other teams brought out a tanker. Cloverdale also came out with engines and rescue trucks.

The Cloverdale Police Department and Putnam County EMS were also at the scene.

He described different kinds of ammunition exploding from the heat as sounding like a “grand finale” of fireworks. However, no one has been reported as being hurt because of this.

The fire was considered under control at approximately 7:30 p.m. The fire crews ultimately used about 25,000 gallons of water to put it out.

Cloverdale fire personnel went back into service at about 8 p.m. after the Cataract department covered their station during the operation.

The property was listed to Brian Paul, who also owns a gun store in the Plainfield area.

The cause of the fire is still under investigation as of Tuesday evening, but Shepherd stated that it is being deemed accidental.

The fire chief estimated total losses, which also included various equipment and a few vehicles, to be between $500,000 and $700,000.