Contest over, but Clover senior still to appear in CBS spotlight 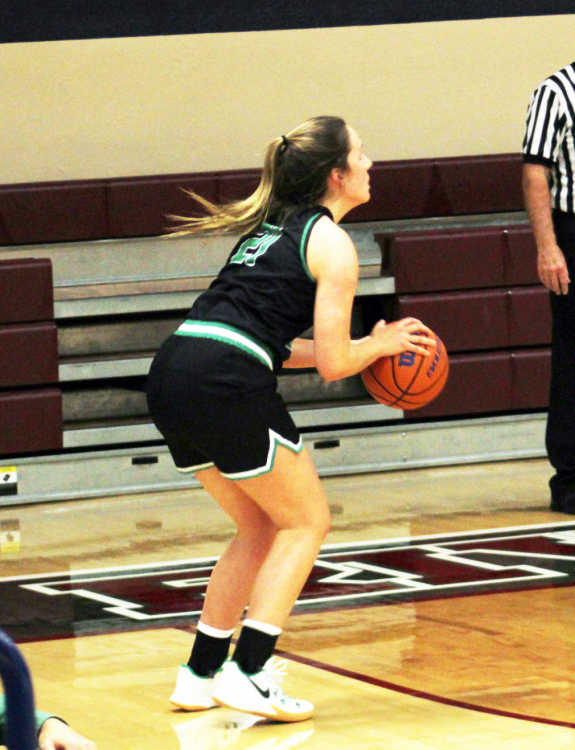 Cloverdale's Kassie Wade eyes a 3-pointer in a game at Riverton Parke this season. Wade's interview in connection with the now-cancelled American Family High School Slam Dunk and 3-Point Competition will air at 2:30 p.m. Sunday on CBS.
Banner Graphic/JOEY BENNETT
Order this photo

Living with disappointment has become the new way of life this year for all members of the Class of 2020.

Everyone lost something, and some lost more than others.

If not for the coronavirus pandemic, Cloverdale senior Kassie Wade would be in Atlanta right now for the America Family High School Slam Dunk and 3-point Championship.

Wade would have competed against Carly Dilworth of Denver in the 3-point finals.

“American Family Insurance contacted us and informed us that they still had their air time for that day and would still like to do something for the competitors,” Wade noted. “They asked for any video and pictures we could send and also did an interview with Kassie via Ring Central along with the rest of the competitors.”

Wade, who will attend Indiana State University whenever the school resumes operations, takes positive memories from the experience that involved several rounds of fan voting in a bracket format with the winners advancing to compete against other winners.

“Getting the chance to participate in the 3-point contest was awesome,” she said. “When I found out, I was on cloud nine! My dad and I had talked about how cool it would be if I got to experience this my freshman year when Cooper [Neese] was asked to be in it.

“It is actually insane how many people voted,” she added. “I am seriously so blessed to live in the community I live in. The elementary kids voted every morning and when I got to go over and talk to them they were so excited and it made my heart so happy.”

Wade noted that several different groups voted religiously for her to advance.

“Mrs. [Joanna] Barker [the computer teacher] was a voting machine, my family voted every way possible, my friends would vote every hour they could and they never acted annoyed,” she said. “I had seniors that graduated last year to get their friends in college to vote for me — which was so cool not even knowing them.”

Wade even developed an unexpected friendship through the process, and got a lot of votes from several time zones away.

“In the second round I went against Lydia Griffith, and she and I developed a friendship,” Wade said. “She had her school and town voting me as well [all the way in Arizona].”

Wade considers there to be “too many people to thank” for their support, and she can’t say “thank you” enough to everyone who helped.

“Every time I advanced to the next round I got more and more excited,” she said. “I knew that Cloverdale was doing everything they could to help me. When I found out the competition had been canceled due to the coronavirus, I was very upset. This competition allowed me to still represent and compete for Cloverdale (which is my favorite thing to do) so it was heartbreaking.”

In reflection, Wade realized the cancellation of the competition was in everyone’s best interest.

“I knew that by canceling this it could give my friends a chance to have their spring sports season and also give the best chance for me to go back to school with my friends to finish out our senior year,” she said. “Unfortunately, neither happened but I want everyone to be safe and healthy overall.”

Wade, a diabetic who aspires to have a career in nutrition or dietetics, has also enjoyed the media portion of the process involving the coordination and taping of the interview.

“The producers that I have worked with have been nothing but amazing and so positive,” she said. “They have done everything they can to make this memorable for all the winners and they have done a great job. I am so thankful to be a part of this and love that this can be a memory from my senior year.” 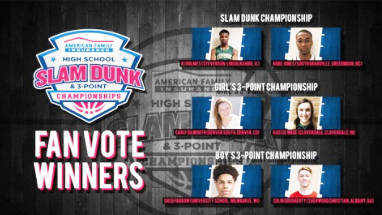 Kassie Wade had advanced to the final round of the American Family Insurance High School Slam Dunk and 3-Point Contest.
Contributed graphic