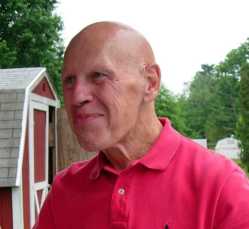 Fred’s early life was spent growing up in the small farming community of La Fontaine, along with his five sisters and brothers, aunt, uncles and cousins during the Depression. During this time, he became an Eagle Scout.

After graduating high school, he joined the Air Force’s cadet program, becoming an officer. He was honorably discharged from the U.S. Air Force after serving in the Strategic Air Command as part of flight crews on B-52s and various experimental aircraft in the 1950s.

While in the Air Force he met and married his first wife, Lynn.

Soon after, Fred, Lynn and their children moved to Greencastle and established his family medicine practice. A giving and dedicated physician, he provided medical care to the local community, including DePauw University, and volunteered his time teaching at IU School of Medicine.

As a recognized professional leader, he served as president of the Indiana Academy of Family Physicians from 1989 to 1990.

Fred was an involved member of the community and held positions of deacon, elder and trustee of Disciples of Christ Church in Greencastle. He was active in community organizations, providing leadership, such as Kiwanis and Rotary.

In his later years, he moved to Brazil to share a home with his second wife, Nancy, and become a loving and active father to her five teenage and young adult children.

Memorials and donations can be sent to: COVID-19 Relief Fund|United Way of Putnam County at: http://www.unitedwayofputnamcounty.org/covid-relief-fund.

A graveside service will be held at La Fontaine IOOF Cemetery in La Fontaine on Saturday, May 16 at 3 p.m.

Arrangements are being handled by Glancy H. Brown & Son Funeral Home in Warren.

Online condolences may be made at www.glancyfuneralhomes.com.