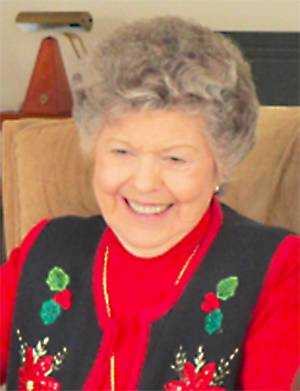 On April 19, 1930 Lois Irene Dellen was born on a farm in Stilesville to Claude “High Pockets” and Katie Dellen.

She is the youngest of four siblings. Her oldest brother Raymond was in high school when she was born but was killed during World War II.

Her other brother Kenny purchased a gas station in Stilesville where Lois and her sister Jean worked pumping gas and cleaning car windows, back in the days of full-service gas stations. Kenny eventually became the sole owner of United Oil and Gas in Indiana.

In the year 1946, a handsome wavy-haired sailor named Eldon Boswell, fresh out of the Pacific Theater of World War II, swept her off her feet and they were married Oct. 26 of that year. Eldon passed away May 23, 2016. He was 94 years old. They were married for more than 69 years.

Lois enjoyed sewing ever since she was a child, having sewed custom-made clothing, costumes, drapes and chair coverings for many people through the years. She worked in Greencastle at Prevo’s Dress Shop, but her favorite employment was working for Sam Hanna at the DePauw Bookstore.

She eventually became a full-time salesperson for Sasco aloe vera products. After that product ran its course, she started her own business in decorating houses, specializing in window treatments.

Lois enjoys membership in her sorority, Kappa Delta Phi. She and Eldon could be found at The Elks almost every Friday night, which Lois continues after his death, although without the dancing!

Lois and Eldon raised four children, Stephen (Indianapolis), Larry (Fillmore), David (Greencastle) and Debbie Crowley (The Villages, Fla.). Her family of 52 people (including two great-great-grandchildren) all wish her a very happy birthday and continue to be amazed at her longevity, good health and good looks!

Lois now resides at Asbury Towers in Greencastle. Due to the pandemic, a celebration of her 90th birthday is not scheduled at this time