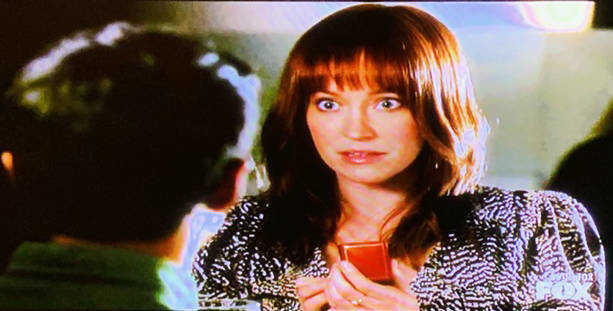 As the character Wendy on a recent episode of “9-1-1,” Greencastle native Jess Berry reacts to her boyfriend’s gift of diamond earrings when she was expecting a marriage proposal.
Courtesy photo

Whether stuck upside-down in a car, screaming her head off on “Chicago PD,” or getting her foot wedged in the mechanism that makes a swanky Los Angeles restaurant revolve on “9-1 1,” Greencastle native Jess Berry is nonetheless on the move in Hollywood.

Of course, the TV and film industry is idle during the current coronavirus health emergency but not even that can stop the intrepid daughter of Jack and Janae Berry of Greencastle. She’s using this hiatus to write a movie screenplay based on her Hoosier upbringing. But more on that later.

If you happened to be watching the Monday, March 30 episode of the Fox series “9-1-1,” titled “Pinned,” you got to see some of Jess’ most extensive TV work (the episode is available on Comcast On Demand, as well as via Hulu and Fox.com) 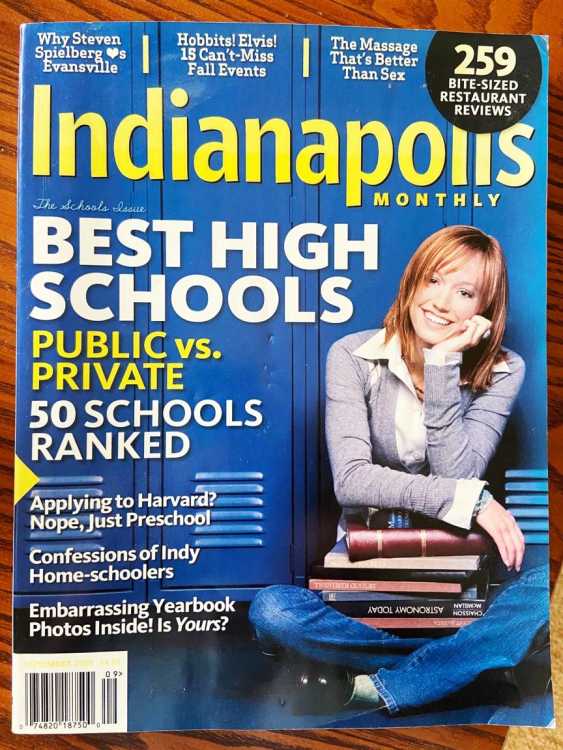 While she has now seen success in television and film, Greencastle native Jess Berry got some early work not only acting for Vickie Parker in Greencastle High School productions, but also on the cover of the September 2005 issue of Indianapolis Monthly.
Courtesy photo

She was the redhead (of course) who thought she was receiving a marriage proposal when her boyfriend pulled out what looked like a ring box over dinner. Turns out it was a pair of diamond earrings in celebration of her forthcoming birthday.

As Jess (her character is Wendy) stands up in mid-argument to say, “Seriously, Larry, five years together and you bring me up here for earrings?,” what starts with a romantic comedy theme turns to drama, sending Jess through a range of emotions.

She screams – Jess has been doing a lot of screaming these days – as her foot gets caught and her pelvis is being crushed by the revolving floor and the wall behind her.

That’s where the ”9-1-1” folks, including star Jennifer Love Hewitt, spring into action from a nearby table.

It all ends happily ever after as Larry asks the injured Wendy, now on the floor, to marry him, and she agrees amid grimaces.

“It’s a happy ending with the proposal,” Jess told the Banner Graphic via phone from California, noting how she’s on the floor crying, her pelvis crushed. “Isn’t that how every girl dreams of her proposal?”

When that episode of ”9-1-1” ended the other night, Janae Berry’s phone “just exploded,” she said.

Jess’ phone also blew up with “such an outpouring,” she said. “I got so many calls. People were sending me texts and little pictures they took from their TV. It was so nice.“

Meanwhile, dad Jack can hardly watch when his daughter, a 2004 Greencastle High School graduate, is put in such peril.

“He really wishes I’d get some parts that weren’t so painful,” Jess says of her dad, echoing what her mom had said earlier, “Jack can’t even watch.”

Jess has also played a lawyer on the series “For the People” and has done commercials for Long John Silver’s, the Chicago Visitors Bureau, Humira and mostly recently, some Hefty commercials with wrestler-turned-actor John Cena, who she calls “just the nicest guy ever.”

Not bad for a girl who graduated from Miami of Ohio, following in her mother’s footsteps with a degree in graphic design. She soon had a job for a big Chicago ad agency and thought she was on her way.

“I was working in a skyscraper, and I thought, ‘I’ve arrived, this is going to be great,’” Jess confided.

But it wasn’t as fulfilling as she hoped it might be.

Then the acting bug bit – although she hadn’t done any theater work since high school when Vickie Parker cast her as Peter Pan as a GHS senior – acting classes followed and she was soon on stage at the prestigious Goodman Theatre and doing improv at Chicago’s famed Second City.

Parts in “Chicago Fire” and “Chicago PD” followed as they were shooting in the Windy City, along with a role in “Family Man,” a Gerard Butler film set in Chicago.

“That flipped her switch right there,” mom Janae said, noting that Jess has the role of Dottie and appears right at the beginning of the film. “That was pretty cool.”

So Jess decided if she were going to be serious about acting, she really needed to head to California, where she’s been now for more than three years. She just signed with new management but still free-lances in graphics work.

“I really wouldn’t be out here without the support of my parents,” she stressed, noting that Janae and Jack came out and help scout out possible homes or apartments, no doubt gaining some reassurance on their daughter’s new career and new home, a couple thousand miles away from Greencastle.

But it’s those Greencastle roots, Jess says, that have helped her career, attributing her some of her success to Vickie Parker’s theatrical support and the guidance of GHS English teacher Donovan Wheeler, who has inspired her to write.

“Mr. Wheeler and Mrs. Parker – I can’t say enough wonderful things about that woman -- and my parents helped me follow my dreams and showed me that hard work pays off.”

The misconception, she said, is that because you’re on TV or in the movies, you’ve got it made.

But in reality, “you’re out there doing hundreds of auditions, building relationships and continuing to work on the craft of acting.”

“It’s awesome, I love it. I can’t imagine being anywhere else.”

Except maybe back home again in Indiana.

In starting to make her own opportunities in Hollywood, Jess has been working on the aforementioned screenplay, putting her pandemic-inspired idle time to good use.

“I’m really excited about it,” she said. “It’s very much drawn from my Indiana upbringing.”

With the working title “Fairgrounds,” her story details “what it means to come of age in the Midwest.”

“I have wonderful, fond memories of going to the fair and playing bingo and doing my photography projects. Some of my best memories are of the fairgrounds,” she added.

The storyline follows a 15-year-old girl who falls in love with a carnival worker at the 4-H Fair in late 1990s Indiana.

After Jess finishes writing it, she wants to eventually direct the film as well.

“You can take me out of Indiana,” she says, “but you can’t take the Indiana out of me.”