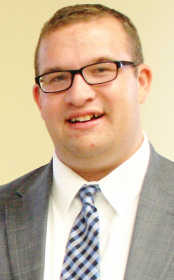 Tyler Wade, by all accounts the youngest City Council member ever when he was appointed at age 25 in the fall of 2014, has resigned his at-large seat, effective May 29.

Wade, now 30, has accepted a new position as associate director of regional admissions at Wabash College, which requires him to relocate to Dallas.

“The opportunity is one that I did not expect to receive when I ran for re-election last year,” the Republican councilman added. “Though it pains me to have to leave my term early, I believe this is the right move.”

Wade plans to be in attendance for the May 14 City Council meeting -– “hopefully in person so we can share hugs and laughs together.”

It is that at-large seat that the city’s Republican precinct committeemen will meet to fill once Putnam County GOP Chairman Beau Baird sets those wheels in motion.

Wade said it has been his “great pleasure to serve the residents of the City of Greencastle these last six years.”

“I am so proud of our community and all that we have accomplished,” he continued. “I cherish the opportunity I was given to play a small part in that momentum.

“It’s been a lot of fun and we got a lot accomplished,” Wade told the Banner Graphic. “You see how different Greencastle looks today from when I started and how far we’ve come with restaurants and shops opening, all the Stellar work and even all the stuff over at DePauw, it’s all pretty awesome stuff.”

Wade, a 2008 Greencastle High School graduate and 2012 political science graduate of Wabash College, said from the beginning of his time on the Council, his focus was on education, promoting economic development, maintaining fiscal responsibility and fighting crime.

And he’s proud to have been part of a City Council that shows little if any party-line affinity.

“There’s not Democrat or Republican ways to fix sidewalks or pave streets,” Wade said. “We have to be pragmatic to get things done.

“I can count on one hand when we’ve even had a split vote. The group takes its job seriously and deliberately and everyone wants what’s best for the city.

“It’s a different level of accountability,” he continued, “when people can see you at Kroger.”

In his resignation letter, Wade pointed to how the Council has delivered on those promises:

Community School Corporation School Board of Trustees in Brian Cox and Russell Harvey.

-- Seeing manufacturing expand in the community. “We have opened outstanding new shops and restaurants, and many of our factories now pay a living wage,” he said.

-- Being able to maintain a “terrific level of public service despite budgetary headwinds.” Through the work of Mayors Sue Murray and Bill Dory, Clerk-Treasurer Lynda Dunbar, and city department heads, “we have consistently balanced the budget and have been great stewards of the public’s resources.”

-- Increasing the number of police officers on the streets and devoting more resources to fighting crime. “Police Chief Tom Sutherlin and our county leadership have worked to make sure our officers have the tools they need to target drug traffickers.”

-- Being “closer than ever” to opening a community center that will provide recreational opportunities, promote public health and wellness and improve quality of life.

-- Passing a Human Rights Resolution and seeing the beginning stages of the creation of a Human Rights Commission “that will work to ensure that all people feel welcome here.”

“To be sure, we still face problems,” Wade reflected. “We must continue to fight poverty, support mental health, fight drug addiction, improve housing, remove blighted properties, balance the budget, maintain and improve public service, and prepare our residents for the economy of tomorrow.

“The challenges are great, and we need serious people who are willing to come up with serious solutions to build a better tomorrow for all Greencastle residents.”

Wade, who earned a master’s degree in student affairs in higher education from Miami University in 2014, notes that his appointment to the Council at 25 “marked a generational change.”

“I hope that others are willing to step up and serve the community,” he said. “The voice of young people is especially needed in public discourse.”

Wade said he looks forward to returning to Greencastle often after his move to Texas.

“It has been one of the highlights of my life to be able to serve you these last six years,” he said, addressing city residents. “Thanks again for that awesome opportunity. This is not ‘goodbye,’ but simply ‘see you later.’

“Greencastle will always be my hometown,” he concluded.