A storm recently tore much of the roof off Houck Covered Bridge, the second time the metal roof has come off since the bridge was rehabilitated in 2014.
Banner Graphic/JARED JERNAGAN

Having spent recent weeks at half staffing levels, the Putnam County Highway Department will return to full staff on Monday, April 27.

The Putnam County Commissioners approved the request by County Highway Supervisor Mike Ricketts this week, which will allow the department to ratchet up the amount of work it’s doing as weather improves.

Most other county departments will remain at skeleton crews through at least Monday, May 4.

Ricketts reported that since the county instituted emergency staffing levels to help fight the spread of the COVID-19 virus, his department has been divided into two crews, working alternating weeks.

Their main focus has been working on gravel roads, with three graders and two maintainers out each day.

“The good news is, the gravels are in about as good shape as they’ve been in a while,” Ricketts said. “It’s too bad we can’t ditch them.”

With a full staff, there should also be increased focus on ditches, which should help keep the roads — both gravel and asphalt — in good shape for longer.

Ricketts briefly summarized the steps the highway department has been taking to keep workers separate as much as possible, such as going straight from their personal vehicles to their work vehicles at the beginning of the day, then the same process in reverse at day’s end.

Commissioners David Berry and Rick Woodall expressed their approval of the plan, noting that Indiana Department of Transportation crews have continued to work at full staff over the last month, taking advantage of decreased traffic on roadways.

“I think we ought to follow the state on that one,” Berry said.

Other departments will continue as they have operated since late March.

Courts and court-related offices will continue to be scheduled an as-needed basis.

The Clerk’s Office and Voter Registration are still open with minimal personnel.

However, for any of these courthouse offices, visitors to the courthouse are still screened both for indicators of illness and to see if their business is truly essential to be performed in person.

Other offices have employees working from home or on limited hours. However, they have been advised to implement procedures to return messages.

The commissioners approved the plan unanimously.

Additionally, the commissioners noted that the courthouse holiday scheduled for primary election day needs to be moved from Tuesday, May 5 to Tuesday, June 2.

A pair of other highway matters were also on the agenda Monday.

Ricketts reported that the storm that came through the area on April 8 damaged property at both the highway garage and the Putnam County Emergency Operations Center next door.

The wind, which was estimated to have topped 70 mph in the Greencastle area, tore a large door (12 feet by 16 feet) from the highway equipment storage barn.

The door then flew approximately 400 feet, hitting and breaking a guy wire for the ham radio tower at the ECO, then hitting a sheriff’s department car parked behind the building. The impact knocked out the back glass of the vehicle and dented the trunk.

The door then bounced up, took out some barbed wire on the back fenced-in area of the EOC, narrowly missed the Red Cross trailer (knocking out a side light) and then continuing on and hitting fencing on the east side, damaging about six fence posts.

Additionally, Putnam County Dispatch Director Dave Costin told the Banner Graphic that seven antennas on his department’s two towers blew askew and his beacon was taken out by either wind or lightning.

The antennas have been fixed, and Costin was in the process of getting parts for the beacon and scheduling a climb to have it fixed. 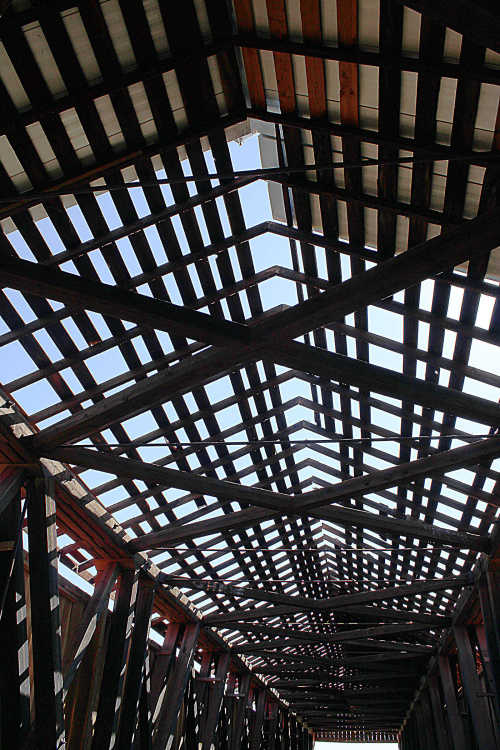 A storm recently tore much of the roof off Houck Covered Bridge, the second time the metal roof has come off since the bridge was rehabilitated in 2014.
Banner Graphic/JARED JERNAGAN

The wind tore off a significant portion of the metal roof that was installed when the bridge was rehabilitated in 2014.

Ricketts gave the good news that none of the damage is structural.

He plans to ask contractors to replace the whole roof, as it has now come off twice in six years. The request is that the number of fasteners holding the metal down will be increased.

Dunbar Covered Bridge is also in need of unrelated repairs, so Ricketts is planning to get estimates on both.

Finally, Ricketts told the commissioners that bids on the 12 miles of road to be resurfaced through the INDOT Community Crossings program are due on May 1, to be opened at the May 4 meeting.

The bids will go a long way in determining how much paving and resurfacing work can be performed in 2020.

With the $1 million grant from the state, the county is required to pitch in 25 percent of the total cost for a total budget of $1.33 million on the project.

However, in 2019, Wabash Valley Asphalt submitted the lone bid on the county’s repaving work, with a price tag well in excess of the budgeted price.

This seriously affected the other paving the county was able to do in 2019.

The commissioners and Ricketts are hoping for more bids and better prices this year.

“The hot mix paving depends on the bids we get,” Ricketts said.