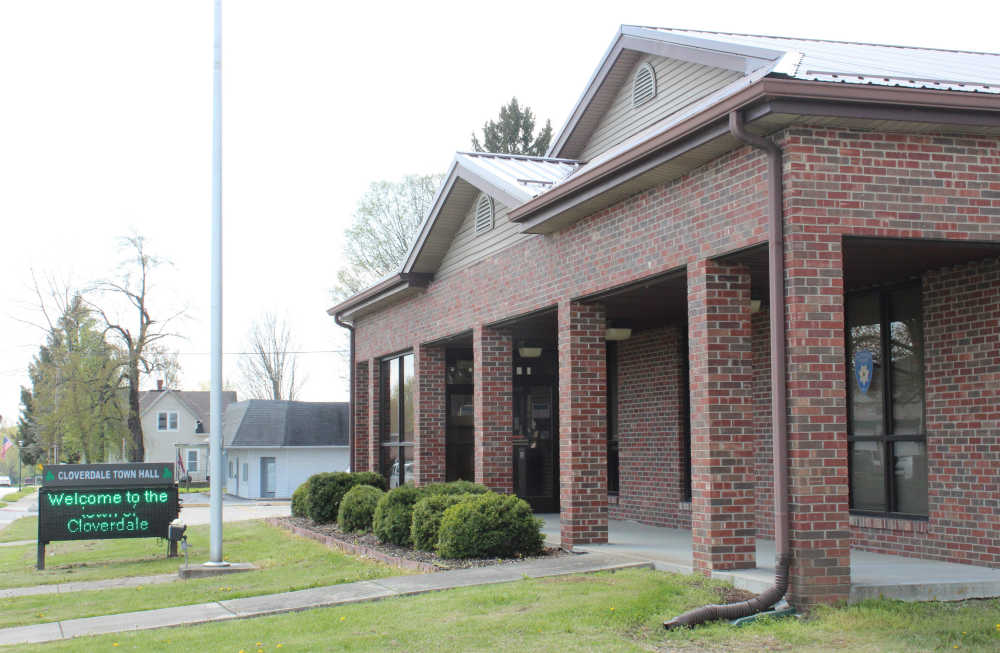 CLOVERDALE -- With both the town and the clerk-treasurer implicated in the controversy surrounding the termination of Wayne Galloway, the Cloverdale Town Council took an additional step hoping to further abate the situation.

It did so with the specter of lawsuits which have been filed by both Galloways, including a new federal suit and a public access complaint directed against the town.

Town Attorney Daniel Hofmann again predominantly led the council through its agenda, beginning with considering Mr. Galloway’s payroll prior to him being “officially” fired.

He said he was previously informed that the former town manager and building inspector’s pay had been stopped on March 27. Hofmann further claimed that neither he nor the council had been told about this move.

The town attorney suggested to the council that Mr. Galloway be compensated with a payroll check covering from March 27 to April 14, when the council publicly approved his termination. This was because he was allegedly continuing to work with the clerk-treasurer or the deputy clerk.

Mrs. Galloway jumped on this, suggesting that the council would go against the town’s employee handbook.

Hofmann responded that this was the “appropriate step,” as it was told to him that the deputy clerk was “apparently” directed by Mr. Galloway to stop his payment on March 27.

“I think that’s very telling, considering he has filed a claim against the town,” he said, adding that the council had to stand by what Mr. Galloway was “told” during the executive session on March 24. Mr. Galloway has alleged that he was given an ultimatum to either resign or be fired regardless.

Hofmann stated that he could not provide a specific date when the deputy clerk was instructed by Mr. Galloway to stop his payment. However, he also added that he was not working during the time in question, seeming to contradict his earlier statement about communicating with the deputy clerk or Mrs. Galloway.

Council Vice President Greg Jay attempted to clarify the timeline, saying that Mr. Galloway was asked to resign or to have his termination approved during the council’s public session that occurred on April 14.

According to the complaint filed earlier this month by Mr. Galloway, Hofmann sent a letter to him at nearly midnight on Thursday, March 26 stating that his termination would take effect the next day.

The principal issue has concerned whether the town took final action -- without holding any public meeting -- in directing the letter to Mr. Galloway and telling him to quit his duties.

Jay motioned that Mr. Galloway be paid with a final paper check covering the period of March 27 to April 14, with the understanding that his benefits “were in full effect until the 14th.” The council approved the motion unanimously.

It must be noted that Mr. Galloway intended in his lawsuit to seek reinstatement in both of his former positions, as well as back pay, benefits and compensation of attorney fees and court costs.

Adding to the controversy is the provision that Mr. Galloway has also filed a federal claim alleging damages. Hofmann stated that the clerk-treasurer has also filed a public access complaint against the town. He did not expand on any details behind these new actions.

Hofmann suggested that the town bring in attorney Greg Morelock, who is based in Greenfield. He provided that he would be good representation for the town and had known him “for several months.”

Jay said he was “very comfortable” with hiring Morelock after a phone conversation the council had with him. As such, he motioned to get him on board as soon as possible. The council unanimously consented.

The council held an executive session prior to the special meeting.

The council also approved a motion to enter a letter of intent with Morelock through Council President Larry Fidler. Hofmann also stipulated later that he would not be compensated for the duties carried out by Morelock.

Mrs. Galloway’s attorney, Graham Youngs, was also present at the meeting. Youngs and Hofmann appeared amiable toward each other in a consultation they had before the meeting began.