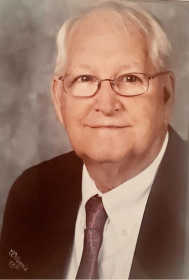 James (Jim) Christy Jr., 77, of Greencastle, was the beloved husband of Karen for 58 years.

He was the proud father of Mark (Debbi), Brian (Linda), Susan Morgan (Tim) and Tad (Michelle).

Jim was the only son of Elvis and Martha Christy. They preceded him to glory. He has one sister, Dorothy O’Brien, who survives.

He graduated from Fillmore High School. After graduation he and Karen made their home in Fillmore for many years before moving to Greencastle. For the past few years, they have enjoyed wintering in Sebring, Fla.

Jim retired from Cinergy after 35 years of loyal service. He enjoyed selling real estate for more than 30 years in Putnam County.

Jim attended New Providence Baptist Church in Greencastle and Bible Fellowship Church in Sebring. He served as a deacon and Awana leader.

As an enthusiastic football fan, he assisted with forming the SPHS Quarterback Club.

Jim had a big heart for people and enjoyed giving. He could have an engaging conversation with anyone he met. One of his outstanding traits was that he was an avid fan. It was evident as he supported his children and grandchildren.

Of great significance to him was to share his faith with those he loved. It was his desire for his entire family and friends to spend eternity with him in heaven.

Due to the current governmental restrictions, the family will have a private service. A celebration of life will be scheduled at a later date.

In lieu of flowers and as a tribute to Jim, please consider generously giving food, finances, shelter, comfort or hope to others.