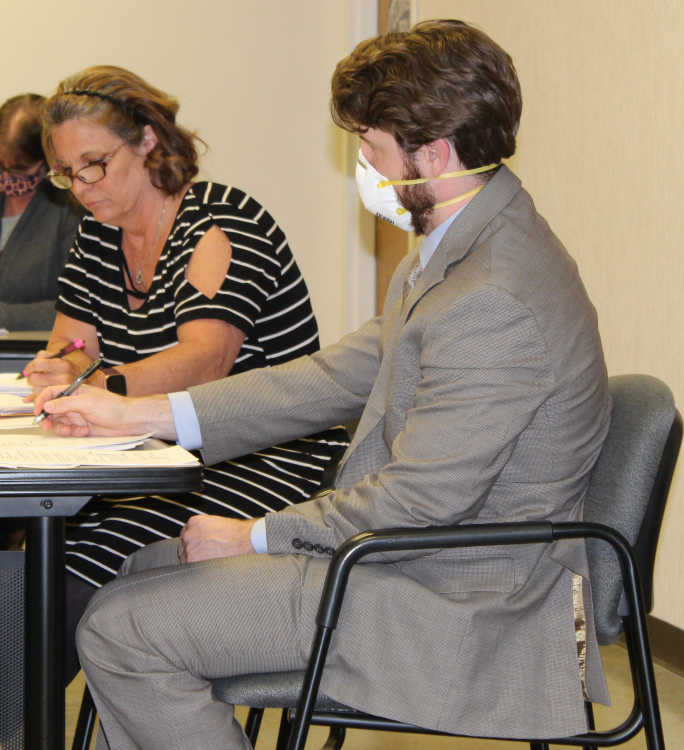 CLOVERDALE -- As the politics in Cloverdale move ahead despite three complaints overhanging it, questions are still to be asked about Wayne Galloway’s employment as the town’s building inspector.

However, the primary issue still concerns whether the town took final action -- without holding a public meeting in the first place -- in directing Galloway to stop his duties through an email letter sent by Town Attorney Daniel Hofmann.

This was one element which Clerk-Treasurer Cheryl Galloway spoke on in comments made during the Cloverdale Town Council’s special meeting Wednesday evening.

She and Town Attorney Daniel Hofmann had a few tense moments as they honed in on the disputed time of Mr. Galloway’s termination. This centered around issuing a check which the council approved during a special session held last week.

The check was meant to cover what would have been Mr. Galloway’s regular pay from the period of March 27 to April 14, when the council publicly announced his termination. However, it had not yet been made out.

Mr. Galloway’s civil suit, filed on April 9, professes that he was sent an email by Hofmann at almost midnight on March 26 stating his employment would end the following day and directing him to vacate his office.

The clerk-treasurer presented this statement physically to the council, adding that the town’s employee handbook provides that the last day worked is when regular wage payment should end.

Hofmann acknowledged that there was a disagreement, but labeled Mrs. Galloway’s “interpretation” of the letter as “subjective.” As such, he stated that April 14 was the definitive end of Mr. Galloway’s employment.

The clerk-treasurer’s attorney, Graham Youngs, responded that he had reached out to the State Board of Accounts for direction on the issue. This was why Mrs. Galloway had not yet made out the payment.

Hofmann fired back that Mrs. Galloway would be in violation of her duties, and suggested to the council that it again order her to promptly issue the check. The council then approved a motion for her to do so.

Hofmann previously stated that issuing Mr. Galloway the paycheck was because he was reported to have continued to work in his capacities with the clerk-treasurer and the deputy clerk.

Mrs. Galloway also attempted to attest to the timeline surrounding the council approving the building inspector’s salary at $40,000 last year. She again argued that it did not question this when the 2020 budget was adopted last September.

The beginning of the “miscommunication” was the council’s approval to amend a salary ordinance to allow for a part-time position at the Cloverdale Police Department for $18,000.

Mrs. Galloway stated that Town Marshal Steve Hibler asked for some of that amount to be moved to compensate and keep an officer. Somehow, she said, the council thought it was then moved to cover the building inspector.

The clerk-treasurer provided that the building inspector’s salary was set at about $13,000 in 2018. She added that Mr. Galloway did not want to continue, having served in an interim basis since 2017. He has argued that the increased salary was requested to attract a committed employee.

Concerns about the budget resurfaced during the council’s regular meeting on March 10. Town Marshal Steve Hibler scrutinized whether the town offices and the street department were drawing money away from the Cloverdale Police Department.

The minutes from an executive session held on March 17 detail that the council discussed the building inspector’s salary, as well as Mr. Galloway’s timesheets which would document his work hours.

Mrs. Galloway provided a packet to the Banner Graphic Monday morning with descriptions for the town’s employees and representatives. However, it does not specify whether they are part time or full time.

It is unclear whether the building inspector’s description was updated or otherwise changed after the salary ordinance was approved. The packet states it as a document was last updated in August 2017, and also does not provide actual salary amounts.

Returning a call from the Banner Graphic Monday afternoon, Youngs stated it was his understanding that both of Mr. Galloway’s positions were full time. He added that the town manager also managed timecards and payroll.

Youngs still argued that the council definitely approved the building inspector’s salary increase, and could have settled any confusion with Mrs. Galloway prior to the current controversy.

“I think it comes down to that the council doesn’t seem to know what had been approved,” Youngs said. “I think that it could all be a miscommunication.”

The town has been met with three complaints pursued by the couple. Mr. Galloway has filed both the civil lawsuit and a federal lawsuit seeking damages and reinstatement.

Mark Waterfill, Mr. Galloway’s attorney, told the Banner Graphic Tuesday morning that the federal complaint -- filed with the U.S. District Court in Indianapolis on April 22 -- puts forth that his client was defamed and unfairly “called a criminal.”

“Instead of sitting down and treating him with respect, they abruptly called him in and told him he was fired,” Waterfill said. He was referencing the executive session held on March 24, which Mr. Galloway was invited to.

Hofmann stated during the council’s session on April 14 that the Galloways were involved in an investigation by an “outside law enforcement agency.” Waterfill believes this scenario was fabricated to further damage their reputation.

The town attorney has claimed he was told Mr. Galloway was, or had been, destroying documents and taking others from his office. Hofmann said he then asked him to vacate his duties to “preserve the integrity” of this investigation.

The clerk-treasurer also recently filed a public access complaint against the town. It has not been specified if this is about her not being invited to the March 24 executive session or Mr. Galloway allegedly being truly fired then.

Hofmann did not return calls for comment made by the Banner Graphic earlier this week.