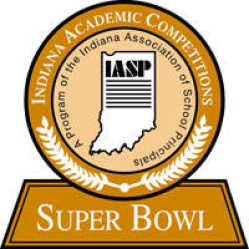 While the format may have been different this year, the results of the Senior Individual Academic Super Bowl were much the same for Greencastle High School team members.

GHS, after having won 2019 titles in Math and Fine Arts to overtake West Lafayette, leads all Indiana schools in all-time state titles with 29 since winning for the first time in 1990.

This year, however, the 2020 competition won’t add to that total since it was not divided into classes and students competed individually, not as a team, changes resulting from the COVID-19 outbreak and the need to do the competition online.

Greencastle, nonetheless, was led by its marvelous mathletes, who in a normal year would have been making a run at a Math title three-peat.

“I’m disappointed that we were unable to compete as a team this year and defend our state title but I am so happy with how my students did individually,” GHS Academic Super Bowl Math Team coach Gayle Hansen said.

“I’m glad my two seniors, Ben Wilkerson and Michael White, were still able to compete,” Hansen added. “I enjoyed working with them when they were students at Deer Meadow and have really appreciated their hard work and the fun we had over the last four years of Senior Academic Super Bowl.”

Coach of the GHS English and Interdisciplinary teams is Nicole Burkhalter, while Brad Kingma coaches the Science team.

Others competing individually in GHS math but not placing were Eihi Yoshinaga, Stephen Dombrowski and Maieasha Rashid.

Also competed individually in GHS science but not placing was Connor Crary.

Others competing individually in GHS interdisciplinary but who didn’t place were Sarah Heithaus and Connor Crary.

Also competing individually in GHS English but not placing was Rain Minartz.

Cloverdale and South Putnam decided to not participate in the individual contest this year.

Meanwhile, the results are also out for the Junior Academic Super Bowl and M.A.T.H. Bowl.

Wilson Hecko from Tzouanakis Intermediate School placed third in the elementary M.A.T.H. Bowl. That team is coached by Jennifer Schlatter.