CLOVERDALE -- Embattled in recent controversy surrounding the town’s budget and the termination of her husband, Wayne Galloway, as both the town manager and building inspector, Cheryl Galloway has resigned as Cloverdale’s clerk-treasurer. 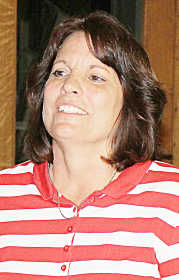 Town Attorney Daniel Hofmann announced during the Cloverdale Town Council’s regular meeting Tuesday evening that Mrs. Galloway had sent a letter to the Putnam County Clerk’s Office and the council formally announcing her resignation. He also said it was effective as of Monday.

“The council would like to inform the public that we’re actively trying to stabilize the situation,” Hofmann stated. “Our town council deeply appreciates the efforts of our employees to maintain a high quality of service and work for the town.”

Hofmann also said the town had reached out to Beau Baird, the county’s Republican Party chair, about how Mrs. Galloway would be replaced. The party will have to hold a caucus to name a new clerk-treasurer.

“Though the last few months have been kind of turbulent here in the town, the council does believe that many good things are to come,” Hofmann said further. “Cloverdale has so many wonderful things to offer the state, our county and even the nation; and we’re working on developing a vision for where the town will go in the future.

“We believe that our current struggles will be short-lived, and soon we’ll have stability and unity through town hall and through our community.”

Per a request made Tuesday morning, Voter Registration Clerk Stacia Hathaway provided the Banner Graphic with the letter written by Mrs. Galloway.

In it, the former clerk-treasurer first provides that the council approved the building inspector’s salary at $40,000 last year, with the town manager also drawing $48,256. She then professes that Mr. Galloway was fired by the council on March 27 for making $88,256, “which they (the council) budgeted.” 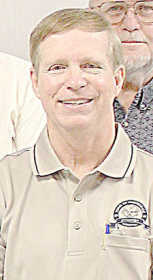 The Galloways have contested the last point since the beginning of this saga. Mr. Galloway first filed a lawsuit on April 9 against the town, alleging that the council effectively terminated him during an executive session held on March 24.

According to the complaint, the town attorney sent a letter to Mr. Galloway at nearly midnight on Thursday, March 26 stating his termination would take effect the next day. The letter directed him to vacate his office and to leave his keys, IT information and other property belonging to the town.

One of the principal issues concerns whether the town took final action -- without holding a public meeting -- in directing the letter to Mr. Galloway and demanding him to quit his duties. However, the council publicly approved his termination during its regular session on April 14.

“This Town Council has accused Wayne and I of destroying Town property -- which we have not -- and they authorized evidence tape put on the doors of the Building Inspector and Town Manager after they changed locks on April 10, 2020,” Mrs. Galloway claims in the letter. “SBOA (State Board of Accounts) has no record of this activity and the Town Attorney has refused to divulge who is investigating this claim. All the while the Town President has been going in and out of these offices at will re-taping the doors.”

Here, Mrs. Galloway references a statement made by Hofmann during the April 14 session, in which he said an “outside law enforcement agency” was investigating the couple. He provided that Mr. Galloway’s termination was to be publicly announced at this time, but this development prompted the letter being sent.

Mark Waterfill, Mr. Galloway’s attorney, stated to the Banner Graphic on April 28 that he believed this scenario was fabricated to further damage the Galloways’ reputation.

Mrs. Galloway also invokes the regular meetings held on March 10 and March 24, in which she states that the town council approved pay raises for three officers, including deputy marshals Levi App and James Collings. She claims the council later denied this in only giving App a raise.

Scrutiny around the town’s budget surfaced during the March 10 session, during which Town Marshal Steve Hibler questioned whether the Cloverdale Police Department was receiving its complete budget, in spite of raises being allocated to the town hall.

Reverberating a more recent issue related to payroll, Hibler said during Tuesday’s meeting that these three were being overpaid, while Crime Scene Investigator Rick Lambert was recently found to have been underpayed.

The council has criticized Mrs. Galloway for a transition to the Keystone payroll system from the ADP system. The clerk-treasurer stated during the council’s April 29 special meeting that she was not trained on ADP, but that her husband was.

Ultimately, Mrs. Galloway has consistently denied any wrongdoing, and has in one instance labeled insinuations and accusations against her as being politically motivated. She has also cast the issue concerning the building inspector’s salary as a miscommunication between her and the council.

“As a Clerk-Treasurer, I delegate my duties to the team I have in place and the team is confused on what roll (sic) they now play,” she wrote. “We all are.

“I feel it is best for the citizens if I step down as Clerk-Treasurer and for my own health,” Mrs. Galloway concluded in her letter to the county clerk. “I appreciate serving you the past eight years and history will prove I served you well.”