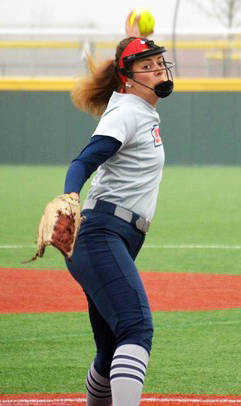 This year, the Greencastle graduate was even sharper with a 4-2 record one save, three complete games and a 2.08 ERA in 43.2 innings of work. Mundy struck out 25 batters and walked just seven.

The Cardinals were cruising along at 16-2 and ranked No. 22 among the nation’s Division II softball programs — primed for a long post-season run.

The Cardinals were scheduled to play in Ohio on March 13 and 14. But, like all the other spring sports teams nationwide, their season was abruptly cancelled.

“We had the best start to the season for our program since 2010,” Mundy said on Monday. “We went 5-1 in our first weekend in Illinois. We went to Florida and started dominating, we beat three or four ranked teams and it was going great.”

After returning from Florida during that week, Mundy noted that her coach (Todd Buckingham) had told the team at mid-week that the upcoming games in Ohio were cancelled.

“We had practice on Thursday, but we didn’t know that would be our final practice,” she said. “The conference was deciding if the rest of our season would be cancelled or not. When we found out, we were all distraught and freaking out.

“It was very heartbreaking, and we were all very emotional,” Mundy added. “We had a lot to play for this year.”

Besides their intrinsic motivation, an external factor was also in play.

“Our assistant coach [Tony Zimmerman] passed away from a heart attack over Christmas break,” Mundy said. “We were playing our hearts out for him. We were more than likely going to win our conference and make it to the regional, and who knows from there?”

Mundy ranked sixth in the nation among Division II pitchers in a relatively new statistic — batting average against with runners in scoring position.

Mundy allowed opposing hitters to hit just .093 against her.

She credits her continued improvement to experience and a better mental approach.

“This year I knew what to expect going into the season, and I worked really hard on knowing myself as a pitcher and knowing my competitors better,” Mundy said. “I worked on what pitches to throw in certain situations, and just to be a smarter pitcher. I learned from experience, and I was more motivated.”

Mundy admits not knowing much about the batting average with the bases loaded statistic.

“That was really cool,” she said. “I didn’t even know that statistic existed. My coach tweeted it and that was awesome.”

Mundy notes that the team returns all of its players for next year and has some good recruits coming in.

She is sure they will all be really anxious to get things going to help make up for a shortened season this time around.

Also like many other programs, funding will be cut due to lost revenue from other sports.

Mundy and her teammates will need to do fundraising on their own to be able to take out-of-state road trips like they did this season.

“Next year we are probably only going to be able to play teams in our own conference,” she said.

Mundy remained in Michigan for a few weeks after the shutdown, but returned to Greencastle earlier this month.

The business/marketing major finished with ah 3.8 grade-point average for the spring semester despite the obstacles of playing games, then not playing games and finishing things up online.

“I was happy with my GPA,” she said. “It was hard doing all my work at home and online, but I got through it. It’s hard to stay motivated and want to do schoolwork all the time.

“I’m working out every day, and I’m taking a six-week online class to try to keep in a normal daily routine.”

Jake Bennett, So., Marian – Finished tied for 20th overall (fourth on team) with 76-83—159 in Gulf Shores Invitational at The Peninsula Golf Club.

Taylor Dixon, So., Franklin – Team did not play any spring matches.

Julia Mundy, So., Saginaw Valley State – Had a 4-2 record with one save for No. 22-ranked Cardinals.

Thomas Fanning, Fr., DePauw – Did not play in any spring matches.