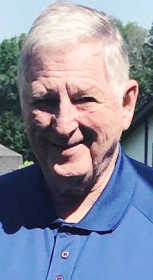 Phillip was born June 22, 1943, the son of Ruth Roach and Wesley Vaughn Kirby.

He had a sister who was 20 years his elder, Thelma Pha Kirby Walters, who preceded him in death.

He married the love of his life Patricia in 1966 and they became the parents of Patrick Dale of St. Louis, Piper LaVaughn of New York and Paul Alex, who passed away at age 23 in 2002.

He was a teacher in Cloverdale schools for 10 years, having taught prior to this in Ohio, Paoli and Shoals, Ind.

He started his teaching career in marching band and ended it as director and teacher of the Cloverdale Alternative School, a move he later claimed was the highlight of his career. His classroom of students who for whatever reason struggled in a regular classroom setting soon became “His Kids,” and the class became a family. Long after his retirement, the “kids” would ask him to preside over their weddings or just seek his advice. Both, which he was always willing to give.

Phil was a strong man of faith. He and Pat loved the Lord and together hosted retreats, taught classes for single and divorced folks, and offered counseling for new and seasoned Christians alike in Clay and Morgan counties.

He and Pat, along with four other families, started the Cloverdale Christian Church in their own home. But Phil was most at ease in his beloved man cave/office preparing and studying God’s Word in preparation for his next sermon. He filled the pulpit for several churches throughout Putnam and neighboring counties until he took a full-time position at Corinth Baptist Church in Plano, Ind., where he served until a year or so ago when he could no longer because of illness. Up until just a few weeks ago, he disclosed to Pat how much he missed being able to preach. To this day, he and Pat run into people who will recant something memorable that they took away from one of his sermons.

Funeral services will be held at Whitaker Funeral Home in Cloverdale at 3 p.m. Saturday, May 30. Visitation will be open to the public from 1 p.m. until service time.

For those who are unable to attend, Phil’s service will be broadcast live through Whitaker Funeral Home Inc.’s Facebook page at 3 p.m.

Condolences may be made at www.whitakerfuneralhome.net