With a six-way race for one spot and low voter turnout almost assured, anything seemed possible when the votes were tallied for the District 3 Putnam County commissioner GOP nomination Tuesday evening. 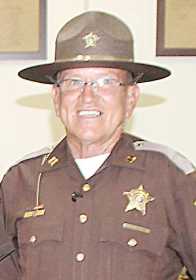 In the end, however, longtime Putnam County lawman Tom Helmer of Cloverdale all but lapped the field, capturing 1,366 votes, good for 41 percent of the vote.

Greg Williams ran a distant second in the race, with 523 votes, followed closely by Ernie Sheldon’s total of 513.

Perhaps the most surprising result was incumbent Don Walton’s fourth-place finish, with 414 votes.

Tom Burnett was fifth with 307 votes, with Shawn McCammack Sr. rounding out the field with 174 votes.

While the final tally suggests Helmer had nothing to worry about, that was not his feeling going into Tuesday.

“I feel very humbled by the result,” Helmer told the Banner Graphic Tuesday evening. “I had butterflies all day but I’m very pleased. I just hope that come November, I can do the job.”

For now, Helmer is unopposed in his bid for the job, though the Democratic Party could fill the vacancy.

For his part, Walton was surprised and disappointed in the result, though he knew anything was possible in a six-way race.

“With that many running it doesn’t surprise me too much,” Walton said.

The question is whether this spells the end of a long career in county government for Walton, who has spent two separate stints of 12 years and then eight more as commissioner, as well as one term on the Putnam County Council in between.

When Walton completes his term in December, it will bring to a close 24 years as an elected official.

“We’ll do as good a job the rest of the year as we can,” Walton said. “I’m glad that we at least had a 20-percent turnout but it could have been a lot better I guess.”

That voter turnout (4,853 votes cast out of a possible 23,895) was a real wild card for all races on Tuesday’s ballot, as was the unprecedented percentage of early votes cast.

Between 1,582 paper absentee ballots and another 581 who cast early ballots last week at the courthouse, nearly 45 percent of the votes were cast before polls formally opened Tuesday morning.

And with more than 1,500 of those coming on the paper mail-in ballots, County Clerk Heather Gilbert had an extra challenge Tuesday, with two teams working just on tabulating mail-in ballots.

However, this job was completed by 4:55 p.m., just more than an hour before polls closed.

“I was pleased it wasn’t as bad as I thought it might be,” Gilbert said.

As to how the overall turnout compares to other recent elections, it’s hard to find a direct equivalent. While it’s often informative to look at the election cycle from four years earlier, 2016 and its turnout of nearly 39 percent is hardly an apt comparison to 2020.

For one thing, neither presidential primary was settled in May 2016, while this year, Presidential Donald Trump has received minimal opposition from fellow Republicans, while Joe Biden has been the presumptive Democratic nominee for months.

Additionally, with the COVID-19 pandemic still limiting social activities, pushing the primary back by a month (and indeed driving the high numbers of mail-in ballots) the 2020 primary seems to be its own animal.

For his part, Helmer was happy with those who got out and voted.

“I thought it was a pretty good turnout,” Helmer said. “It was beautiful weather.”

While he may still face a Democrat opponent in the fall, Helmer had some thoughts on what the county is doing well and what he hopes it will do better if he’s elected.

One of these is likely informed by his role in emergency services -- 27 years on the Putnam County Sheriff’s Department (including four as sheriff) and the last nine as director of the Putnam County Emergency Management Agency.

However, the virus has also had a negative impact on business in Putnam County and throughout the nation. Helmer hopes to attract new businesses to the county.

“We need to do something to attract more businesses to the county,” Helmer said. “There have been a lot of people who this virus has affected. If we can do something, we should attract more jobs to this county.”

And being a commissioner just wouldn’t be the same without concerns about county roads.

“Of course, the roads,” Helmer said. “We need to keep up with road maintenance and work with the legislature to see if we can increase funding. Attracting more businesses would help that as well.”