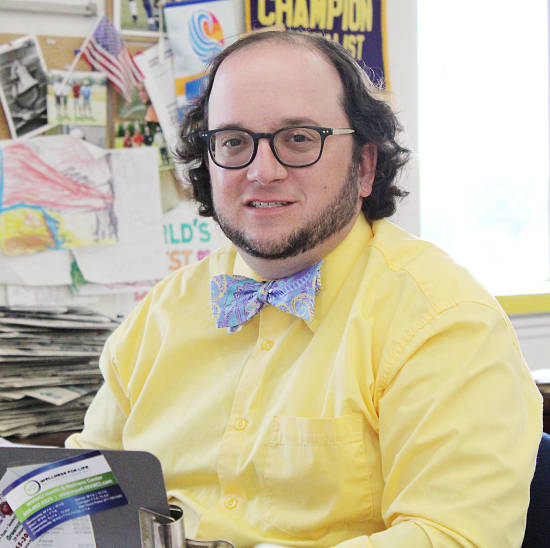 He succeeds longtime Editor Eric Bernsee, who will continue with the Banner Graphic in a supportive role to Jernagan in the newsroom.

“Jared has essentially been serving in the capacity of editor for more than a year now as Eric has dealt with his health issues,” Taylor said. “We look forward to continuing under Jared’s leadership.

“Eric, meanwhile, will assume the assistant editor role – or whatever title they choose to assign to it. At any rate, it is great to have them both functioning in the newsroom along with Staff Writer Brand Selvia and Sports Editor Joey Bennett.”

A native of Williamsport in Warren County, Jernagan came to Greencastle as Banner Graphic sports editor in March 2007 and became assistant editor in November 2008.

“After 13 years in Putnam County, I view this as home,” Jernagan said. “I’ve said a number of times over the years, whatever the future holds for me, I have no plans to leave Greencastle. I love it here, and I am honored to assume the role of editor here at the Banner Graphic.

“Don’t look for sweeping changes with me in a new role,” he continued. “Eric and I have worked together wonderfully for the last nine years and I hope that partnership continues to flourish. The team we’ve put together will remain committed to being your source of Putnam County news.”

A 1999 Seeger High School graduate, Jernagan is a 2003 Wabash College graduate with an English major and political science minor.

He started his journalism career at The Review Republican, Fountain County Neighbor and Lafayette Leader in 2005, becoming editor of all three in 2006.

He and wife Nicole were married in 2007 and are the parents of two children, Miles, 9, and Hannah, 5.

Bernsee, a native of the Chicago suburb of Broadview and a graduate of the University of Missouri School of Journalism, joined the Banner Graphic as managing editor in September 1975 and continued as editor through 2003.

His prior experience included two years as assistant sports editor at the Courier-Tribune in Bloomington, and two more years in the same role at the Richmond News Leader in Virginia.

After a seven-year hiatus as communications and public relations director for Dixie Chopper, Bernsee returned to the Banner Graphic to take the editor’s reins again in March 2011.

“Editor of the Banner Graphic is essentially who I am,” Bernsee said after 36 years at the helm. “I have some physical limitations now, making it the appropriate time to pass the baton to Jared, who has done a marvelous job in my absence most of the past year. I know we will continue to work well together to provide our readership the type of stories and coverage they have grown to expect.”