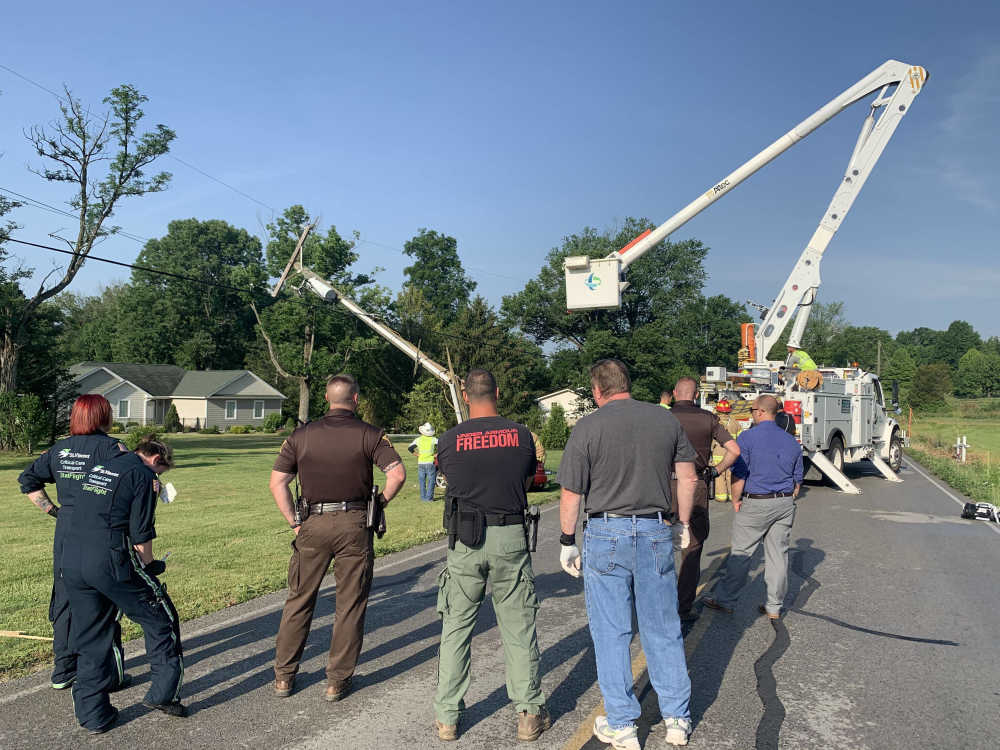 Emergency responders wait as Duke Energy crews work to secure a power pole broken in a Friday-morning crash. While the pole was secured and the car pulled away, the driver, 34-year-old Levi Dotson of Brazil, succumbed to his injuries before he could be extricated.
Banner Graphic/JARED JERNAGAN

Levi Dotson, 34, was northbound just past the County Road 300 West intersection (Antioch Church) at approximately 7:50 a.m. when he apparently lost control of his 1990 Mazda Miata.

The car left the east side of the roadway and slid into a power pole, making impact with the driver’s side door. The impact broke the pole several feet in the air.

An off-duty Indiana State Trooper and another passerby were among the first on the scene, coming upon the badly-damaged car to find it on fire with Dotson trapped inside.

The trooper and the passerby were able to extinguish the fire. Shortly thereafter, other emergency personnel arrived to attempt to extricate the man.

Greencastle firefighters worked for more than an hour to extricate him before his medical condition worsened. At that point, emergency medical personnel from Putnam County EMS and StatFlight began working to revive him.

Unfortunately, Dotson succumbed before he could be extricated.

The broken pole complicated the process, as two Duke Energy trucks had to secure the broken pole before the car could be pulled away from the base.

Speed is believed to have been a factor, not only because of the heavy impact with the pole, but based on reports from other motorists that the Mazda had passed two cars at a high rate of speed prior to the crash.

Dotson was employed at nearby Phoenix Closures on the south end of Greencastle.