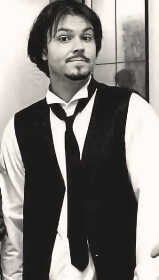 Nick graduated from Martinsville High School in 2000 and then earned his Bachelor of Fine Arts from the University of Indianapolis.

The world has lost a rare and beautiful soul. Nick was a person who left his imprint on everyone he met. He was one of the few people who walked by everyone with no judgment. He viewed all people as equals regardless of their status in life, money they had, titles they had acquired, color of their skin or clothes they wore.

He shared his knowledge of art with many, always trying to help lift others up to their full potential. Nick was a generous person who could have one dollar in his pocket but without hesitation hand it to a stranger if they needed it.

Nick was an extraordinary artist. He began art classes at the age of five. He was blessed with natural talents and spent many years of his young life at the zoo, painting the animals he so dearly loved.

No matter where he was, art was a part of his life. If he was on the beach, he was building elaborate sand sculptures that people would crowd around to view. When there was snow on the ground he would build snow sculptures in the front yard that were so incredible the local newspaper reported on it because of so many people had called to tell about what they had seen.

He is survived by his parents; a brother, Caleb Ray (wife Laura); three nieces, Autumn, Ellison and Ruby Ray; and his fiancée Layla Rainbolt.

A memorial service will be held at 4-6 p.m. on Wednesday, July 8 at Rick’s Café Boatyard in Indianapolis, where we will display his artwork and share memories of the joy he brought to us all.

Memories may be shared with the family at www.BittlesandHurt.com.