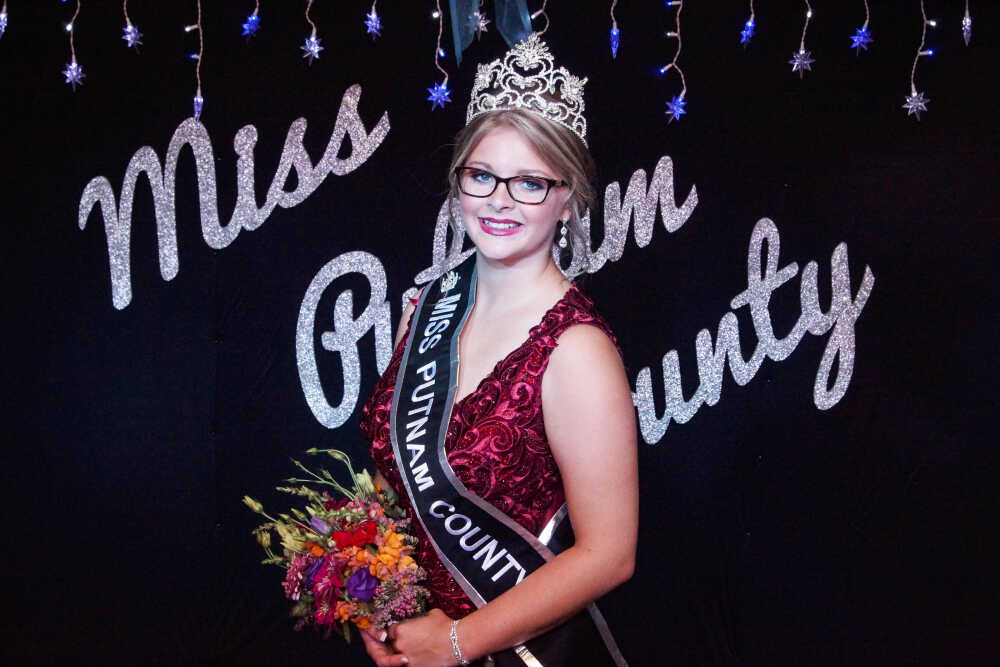 Having been crowned before a bigger online audience than in person, Miss Putnam County Kinzee Wilson celebrates her first moments as 2020 Putnam County Fair queen. The daughter of Melissa and Chris Wilson, Kinzee is a 2020 Greencastle High School graduate who is bound for the University of Southern Indiana this fall.
Jessica B. Photography/JESSICA BRIONES

It was a Miss Putnam County contest unlike any other.

What would have seemed a compliment any other year is a stark reality in 2020.

However, as different as it was, 2020 Miss Putnam County Kinzee Wilson managed to react in much the same way as so many young women who came before her in a contest dating back to 1958.

She was happy for her fellow competitors, felt blessed to have drawn closer to them and humbled by her selection.

“I was definitely really proud of all the work that we’d put in,” Wilson said. “I was so excited for all the girls.”

With only four contestants, there was no suspense left after emcee Jeff Rich named Mackenzie Miles as first runner-up, leaving Wilson as Miss Putnam County by process of elimination.

However, it took a quick reminder from 2019 Queen Nicole Newgent that Wilson had indeed claimed the crown.

“When watching Mackenzie get crowned, Nicole had tapped me on the back and I thought, ‘Oh wait, I’m Miss Putnam County,’” Wilson told the Banner Graphic. “I was so happy for the other girls that I didn’t even think about that.”

The 2020 contest offered a unique chance for the contestants. Not only were there only four of them, all four were Greencastle High School graduates who had spent time as cheerleaders together.

“To be up there with three girls who are now my best friends,” Wilson said. “We went through high school together. We cheered together. And now we did this together without really having planned it.”

It wasn’t all the same as years past, though, as the bonding among the contestants couldn’t start immediately.

“We started out our meetings online, so it was kind of hard at first,” Wilson said. “But as soon as you start meeting in person, that bond grows tremendously and very quickly.”

A 2020 GHS grad, Wilson is the daughter of Melissa and Chris Wilson. She has one younger brother, Keifer.

A 4-H member who is about to complete her 10th year, Wilson has been active in the Horse & Pony Club as well as various community building projects.

She will be attending the University of Southern Indiana in the fall to pursue a degree in elementary education, with the hopes of becoming a kindergarten teacher.

At this point, it remains up in the air exactly what “going to college” is going to look like, ranging from in-person classes to online to various possible combinations.

“As of right now, we’re still going to be moving onto campus and going about with masks on our faces,” Wilson said.

Asked about the limited crowd at the queen contest, Wilson said it wasn’t necessarily all bad.

“I don’t have anything to compare it to, but for me, I was less stressed,” Wilson said. “The people who were there were just there to support us. I didn’t really think about the camera at all. You just focus on the people around you.”

With Noah Poynter doing the filming, it was livestreamed via Facebook, where it remains available for those who missed it live.

“Jeff Rich, our emcee, said, ‘Tonight we had 101 people on our live video,’” Wilson recalled. “You think, wow, that’s a big number when most of those are multiple people watching that screen.”

With a week to prepare for the fair itself, Wilson said one of the main things she’s looking forward to is getting even closer to the other three ladies on the court.

“I’m looking forward to seeing how close the four of us on the court can get through the week,” Wilson said. “My biggest goal is to make someone’s day by giving them a smile even if they can’t see it through the mask. I just want them to know that this isn’t just about us. It’s about being there to support the 4-H’ers.”