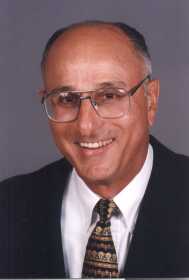 For safety reasons, the family will be having a private graveside service on Tuesday, September 22, with a proper celebration of his life planned for September 2021.

The son of Theodore and Sophia Mourouzis, Greek immigrants, Nick was born in Tuscarawas County, Ohio, on April 16, 1937. He starred in football, basketball and baseball in high school and was recruited by legendary coach Ara Parseghian to play quarterback for Miami University (Ohio).

He graduated from Miami in 1959 and later went on to earn a master’s degree and a director’s degree from Indiana University.

Nick taught a variety of subjects, from math to swimming and coached high school and college football for more than 50 years. After assistant coaching stints at Ball State and Ohio universities, he moved to Indiana University, where he was on staff for the team’s 1968 Rose Bowl appearance, and then to Northwestern.

In 1981 he accepted the head coaching job at DePauw, where he served as professor of kinesiology and head football coach for 23 seasons before semi-retiring in 2003. He became emblematic of “Tiger Pride,” and his players knew him for his relentlessly positive outlook and quotable sayings. “Nothing great was ever achieved without enthusiasm” was a favorite. He delighted in educating others and spent his summers holding camps and clinics.

Nick received many accolades throughout his career, including Southern Collegiate Athletics Conference Coach of the Year, Indiana Collegiate Athletic Conference Coach of the Year and Distinguished American Award from the central Indiana chapter of the National Football Foundation. He was inducted into Miami University’s Cradle of Coaches in 2003 and was named a Sagamore of the Wabash by the state of Indiana.

He was a member of the DePauw Athletics and Indiana Football Halls of Fame, and DePauw’s football field was dedicated as Nick Mourouzis Field in 2013. One of his proudest achievements was serving as DePauw’s commencement speaker in 2004.

Nick was an innovator, having patented a kicking tee and founded Chi Alpha Sigma, the nation’s first college student-athlete honor society, which has nearly 300 chapters around the country.

Off the field, he was a bit of a handyman and enjoyed home improvement projects as well as golf. He was always ready to lend a helping hand to anyone who needed it and served as a mentor to many who followed him into coaching. It was rare for him to go anywhere without running into someone he knew.

He was preceded in death by his sisters, Alexandra (Wayne) Reese and Zoie (Gus) Famal.

His family thanks so many of you for reflecting that love back on him.

Remembrances can be shared at www.hopkins-rector.com.