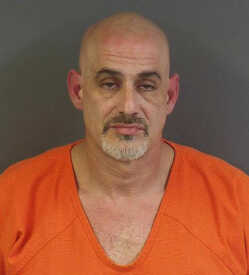 A Cloverdale man is facing a laundry list of charges stemming from a series of incidents Monday.

Accused of driving while intoxicated, resisting arrest to the point of burning an officer with a cigarette and being in possession of a significant amount of methamphetamine, Stacy D. Lewis, 47, has been charged with three felonies and three misdemeanors.

Local police were notified when a motorist called Putnam County Dispatch shortly before 8 p.m., saying he was following a gray Chevrolet van that had been driving erratically for 30 miles. The man said he had called 911 several times, but not police had been able to locate the vehicle.

At this point, the suspicious vehicle had hit a guardrail but continued to the U.S. 231 exit, where it turned south toward Cloverdale and then onto Stardust Road.

App reported that the officers arrived at the address to find the van in question parked in the yard. App approached the vehicle and found Lewis slumped over the steering wheel, initially unresponsive.

App noted a baggie with white powder in one of Lewis’ hands and a burning cigarette, nearly down to the filter, in the other.

The officers were able to rouse Lewis, but struggled to get him to comply. When he finally exited the vehicle, App noted that he continued to passively resist his commands.

App finally decided to reach for one of Lewis’ hands in order to get him to comply, at which point Lewis burned App’s hand with the cigarette.

The officers were, however, able to get Lewis to the ground and restrained.

A search of the van and Lewis’ clothing returned a white substance that field tested positive for methamphetamine, as well as syringes, items of paraphernalia and prescription drugs.

Before searching the van, App discovered his finger had been burned to the point that it drew blood.

Lewis was transported to the Putnam County Hospital, though he refused to give consent for a blood draw.

After he was later taken to the Putnam County Hospital, a container and a crystalline substance were found in the jail van. This also field tested for methamphetamine.

In all, officers discovered 35.56 grams of methamphetamine. The threshold for a Level 3 felony is 28 grams.

Lewis was also discovered to be in possession of several controlled substances.

He was booked in the Putnam County Jail at 10:13 p.m. Monday, initially on charges of leaving the scene of an accident, driving while intoxicated-refusal, trafficking with an inmate, unlawful possession of a syringe, battery against a public safety official, obstruction of justice, false informing, resisting law enforcement, possession of methamphetamine, possession of paraphernalia with a prior conviction and maintaining a common nuisance.

Lewis remained lodged at the Putnam County Jail as of Thursday.