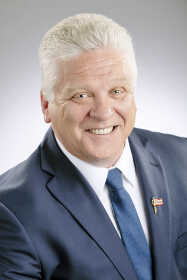 Campaigning for office in 2020 looks different than it ever has in the past.

The COVID-19 pandemic has fundamentally changed the way the country does business, and politics is no exception.

For District 4 congressional candidate Joe Mackey (D-Lafayette), that meant adjusting on the fly back in March. Fortunately for the challenger, he had some young volunteers up to the challenge.

“It’s kind of funny,” Mackey told the Banner Graphic in a recent interview. “We got to the shut down there in March. Just prior to that, we were talking to the younger people on the campaign and saying, we’re going to start laying out canvassing crews in targeted areas. We started to lay all this out for them and they were like, ‘We’re going to do what?’ They just weren’t ready to go out and knock on doors and canvass.

“Then shutdown came,” he continued, “and right away these younger people on the campaign staff pivoted us right away into the e-media. They put us out online. We immediately jumped into Zoom events and things of this nature. Having a good mix of older campaigners and younger campaigners really helped us out in those weeks where everybody was trying to figure out what to do. We found we were already doing those things.”

Of course, things have opened up as the state loosened COVID-19 restrictions, though still with precautions. Mask wearing remains important. Open air events have been key, such as meet-and-greets in parks.

Mackey noted that the opinions on things like masks vary in far-flung District 4.

“I know when I get into Cass County, folks up there wear a mask,” Mackey said. “Cass County has been hit very hard. Those folks take it seriously and that’s good to see. We still need to flatten this curve. The more we help each other out, the quicker we can get back to normal.”

Mackey knows a thing or two about what Americans face when it comes to cancer, as he and his wife have buried two teenage children who had two different kinds of cancers. So affordability and access of health care are important topics to him.

“In the more urban areas, affordability is the issue. In the rural areas, it’s also accessibility,” Mackey said. “Americans are being priced out of health care. It’s no longer affordable. We’re watching Americans die for lack of access to insulin, for instance.”

He notes the case of a woman in White County who is a Type 1 diabetic: “It’s cheaper for her to get insulin from Canada than it is at the CVS down the street from where she lives. This is a problem in this country.”

Mackey adds that he worries people like this will become more imperiled if the Affordable Care Act is overturned.

None of this is acceptable to the candidate.

“We need to work on making sure that Americans have access to health care,” Mackey said. “We need to make sure it’s affordable. The fastest-rising cost of living is health care. It’s climbing at a rate of about five percent. It’s expected to start climbing at six percent. As it gets more expensive, the coverage gets narrower and narrower and our out-of-pocket expenses get greater and greater. We have to stop this cycle.”

Specifically, Mackey worries about infant and maternal mortality rates, both of which he cites as being poor in the Fourth District.

“We have 10 rural counties here in the district that have been designated maternal and infant healthcare deserts,” Mackey said. “We’re not even providing basic health care needs for these women and children. Indiana ranks third in the nation in terms of maternal mortality rates — third highest. We’re seventh-highest in infant mortality.

Public education is another area of concern for Mackey, throughout the country and in the district.

“Out in the rural areas, public school education funding is a concern,” Mackey said, “keeping teachers, providing internet to children that don’t have it.”

“We have entire graduating classes of kids not going to college — not one kid,” he added. “They live in rural areas, they have been denied the opportunity for what I call equitable opportunity in education.”

There are also environmental issues that he sees coming squarely into focus here in Indiana, noting people drinking toxic water in Morgan County as well as 86 coal ash pits throughout the state

“Our Hoosier environment is a very important topic,” Mackey said. “People are paying attention to that now around the district.”

In challenging Congressman Jim Baird (R-Greencastle) Mackey said he wants to go to Washington but keep the focus on what’s happening in his home district.

“I think there’s an overwhelming feeling that too many elected officials are focused too closely on the national rhetoric and have, in the process, completely overlooked their own district in the way of needs,” Mackey said. “I think (voters) want that changed.”

That’s Mackey’s hope, with focus on things such as “underfunded, underequipped and understaffed” volunteer fire departments.

“I had one fire chief tell me he covers his volunteer fire department during the day with 70-year-olds and then prays that nothing bad happens,” Mackey said. “I think as part of rural infrastructure, we could create a grant program that would allow some of these rural communities to invest in their fire departments.

Finally, Mackey said he wants to make sure he is talking to citizens, making sure their voices are heard.

“I think, in the long run, we’ll all be better off if we just kind of pay some attention to what is going on. I know the voters want that. I know what I’m hearing is, ‘Pay attention.’ They are willing to talk if folks will listen.”