‘Don’t hesitate to fight for yourself ’ 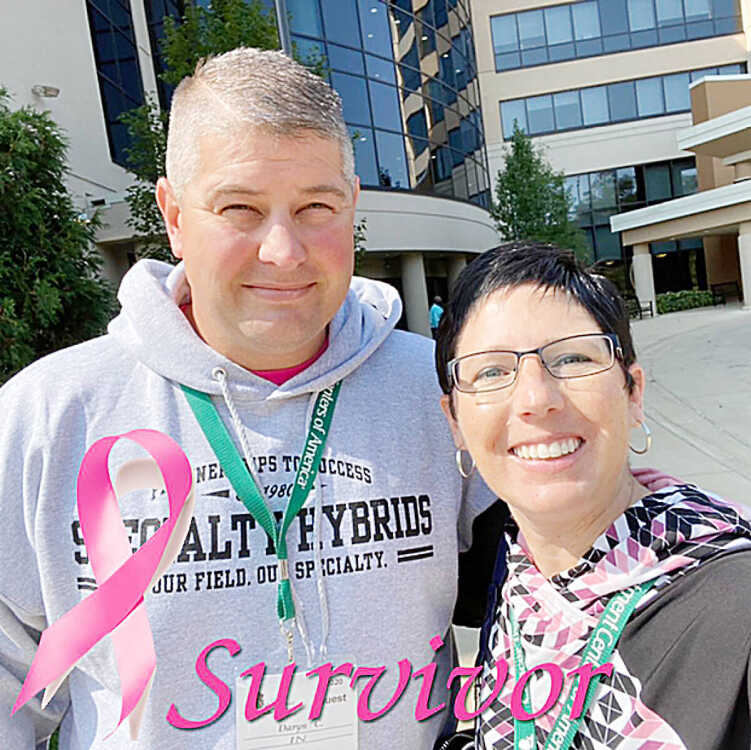 Celebrating a final chemotherapy infusion, Daryn and Meredith Clifford pause for a selfie outside Cancer Treatment Centers of America in Chicago. Meredith is currently in remission in her battle against breast cancer.
Courtesy photo

Clifford encourages others to be their own advocates

By her own admission, Meredith Clifford hasn’t always been one to stand up for herself.

But if there is any blessing to be found in contracting breast cancer last year, it’s that Clifford found her voice.

“I’ve never really been one that stands up for myself and I feel like I found a voice through some of this,” Clifford told the Banner Graphic recently, “because I did rely on my inner voice, which I’m not super good at listening to most of the time. But I did.”

In facing down the disease, Clifford found her voice and found out a lot more about herself, about self-advocacy, about faith, about family, about love, about becoming a survivor.

The last year-plus has been a trying one for Meredith, husband Daryn and children Skylar, 21, and Colton, 17. She was diagnosed last September, and in the time has been through wholistic treatments, chemotherapy, radiation, a mastectomy and a plethora of tests. In February, she’ll have reconstructive surgery.

Her biggest message to those facing breast cancer is to be their own advocates, choose their own paths. While she chose Cancer Treatment Centers of America for her treatment, she doesn’t say all other women should do the same.

Breast cancer treatment is not one-size-fits-all. If it feels like the wrong fit, then it just might be.

What follows is Meredith’s story, in her own words.

My story might be a little more complicated than some.

I had been really sick in the spring of ’19, had kind of a fluid buildup on the left side of my neck. As that started to drain, I noticed a lump forming in my breast.

I just kind of thought things were moving through my system. We’ll give it a minute.

So I didn’t get it checked out right away.

That was probably June or July, so then in September it wasn’t going away. It wasn’t necessarily getting any bigger. So I went to get it checked out.

That’s when I received my diagnosis, which was Stage 3, Grade 3, triple negative breast cancer.

At that point, the numbers they were giving me as far as success rates with chemo were in the 30-percent range. I didn’t feel all warm and fuzzy about going that route with that percentage.

So I decided to do more natural things, which was a variety of diet changes, juicing, I went and saw a naturopath — all different sorts of things. And it quickly grew.

From the point of diagnosis, which was Sept. 6, until mid-November, it grew like crazy. By the time I started chemo, it was a nine-centimeter tumor that was visible on the outside of my skin. I had extreme pain.

I just kind of knew then that I didn’t have any other choice.

Not an assembly line

I went for a second opinion with a different oncologist because I didn’t really like the odds that the first one had given me. I felt like everybody put you on an assembly line, like everybody’s treatment is the same, this is what we do for breast cancer.

I felt like it should be more personalized. Not everybody’s situation is the same.

The only thing I can say is I didn’t feel peace with either of those oncologists.

So, I had called Cancer Treatment Centers of America the next day and I got a call back from an oncologist within like an hour and a half on a Friday evening. He sat and talked to me for probably 30, 40 minutes and told me he could see me that Monday. And I thought Daryn was going to kill me because I was chasing yet one more rabbit.

I felt like I kind of had a say in my care. I just felt peace with that plan.

So we went to Chicago every three weeks for infusions. I went there for my mastectomy in May. I’ll go there again for reconstruction in February. They have been phenomenal.

Be your own advocate

I don’t say this to preach for them (Cancer Treatment Centers). I’ve had a few friends send people to me and they just need support.

The biggest thing I can say is, be your own advocate. For instance, I started with a different chemo regimen in Chicago than I would have had here. I had really, really good results with that. And then it wasn’t all the way gone so they switched me to the regimen that is the standard of care, so to speak, around here. And I didn’t really have any results with that.

Had I just jumped on the assembly line and done what I didn’t have peace with but everybody was telling me to do, I don’t know that I would have had the results that I had.

What I tell people is be your own advocate. Don’t hesitate to fight for yourself. I don’t like confrontation. I’ve never really been one that stands up for myself and I feel like I found a voice through some of this because I did rely on my inner voice, which I’m not super good at listening to most of the time. But I did.

I prayed a lot. I learned to walk by faith. There’s a Bible verse — Isaiah 41:10 — that has been passed to me I can’t tell you how many times throughout this process. Everything I would open up would be Isaiah 41:10 and I would think, “OK, that’s God telling me, ‘Do not fear for I am with you.’”

It had never been a thing for me before. That’s not a verse I had always loved. I didn’t even know it, to be honest.

The color yellow showed up everywhere and I was like, “What the heck?”

In the beginning, Daryn had said, “I just wish when we prayed for answers, we could hear God telling us what to do.”

Literally within days, everything yellow started showing up around me. I didn’t even put the two together until I was telling my story to a friend.

Feathers — I had a friend showing me something on her husband’s race car where he had about gotten in a wreck. It was a scuff that looked like a feather.

But she said, “You know what they say, when feathers appear, angels are near.” I said, “Oh, I’ve not heard that before.”

I literally went home that day, was taking out the trash and found a teeny, tiny white feather in my driveway.

From then on, they’ve shown up everywhere. When I’ve been having the days of questioning, what are we supposed to do, it was like God’s way of telling me, “Just stay the course. Have peace. You’ll get through.”

It’s really kind of been an amazing journey for what it is. I’ve learned a lot.

You just learn to know, it’s all going to be OK. Whatever the end result is, it’s what it’s meant to be and it’ll be OK.

They’ve actually been really good in Chicago, as far as when I was going through chemo, they would still allow Daryn to come into the infusion center with me, those types of things.

When I went to my mastectomy, he dropped me off and pre-op and I was by myself until they discharged me down to the surgeon’s office, where he met me so we could get our post-op instructions. So I spent, luckily it was just one night there in the hospital by myself.

They have a guest quarters which is maybe a block and a half away. That’s where we always stay when we go and that’s where he was. The doctor was really good about communicating with him via phone, like “OK, we’re halfway through, things are going well,” and then giving him an update when it was over.

The actual best part about (the pandemic) was there was zero traffic around Chicago for three or four months when we were going. It was horrible to try and get there because it’s actually about 45 minutes to an hour north of Chicago and you never knew what kind of nightmare it was going to be getting around Chicago.

When they went on lockdown, we were like, “Wow, this is nice.”

There have been a few pluses to it.

It was honestly kind of nice in the fact that some of the months I felt the worst was during all of that. I didn’t have to be out seeing people because you couldn’t go anywhere. That was kind of nice to be stuck at home.

As far as the pandemic goes, with Colton’s spring sports last year, I was like, “What do I go to, what do I not go to?” You try to stay out of crowds some. I had a surgery going on that we were trying to plan.

When they canceled everything I thought, “Well that takes care of that. I don’t have to stress about it.”

It takes a village

People have done some amazing things for us. The support we have received from the community, family, friends, employers. They’ve done countless fundraisers.

Before my last chemo treatment, there were 70-ish cars that came and did a drive-by to celebrate my last infusion and drop off little gift bags.

It has been amazing. You don’t ever think people even really know how you are, then you go through something like this and they come out of the woodwork to try and make the journey just a little bit easier.

In the beginning, I think it’s just stressful. You have to figure out this new way of life. Boundaries, as far as everyone wants to be there with you. But sometimes you don’t want anybody around. Being able to say that without coming off as unappreciative or rude. You want that support but at the same time sometimes you just need your space.

We have learned how to walk through that.

There is no right way, I guess. It’s different for each family and we just have to be open and respectful to the fact that I might want to be alone but then there’s my mom who’s dying because she just wants to hug her daughter.

Those are tough boundaries to figure out that balance.

We are on the mend and have had pretty great results.

They consider it remission until I think five years out, then they would call me cured, I think. I’ll go back for testing six months after my radiation stopped, so I’ll go back in February. When I go back for my surgery, I’ll have another scan, just to make sure that things are what we think they are.