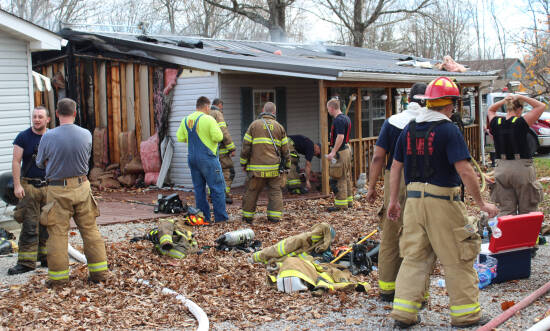 Area firefighters are gathered at the site of a house fire that occurred in Van Bibber Lake Monday afternoon.
Banner Graphic/BRAND SELVIA

At approximately 12:15 p.m., a box alarm went out for a fire located at 6081 Floy Lane within the lakeside community. When units first arrived on the scene, white smoke was seen emanating from the home.

One Russellville firefighter stated that the wind was also blowing rapidly. This posed a danger to the surrounding homes if the fire was able to spread.

When the Banner Graphic arrived at the scene at about 1:40 p.m., firefighters were inspecting the extent of the damage and remaining hot spots.

While the house itself was considered a total loss, the siding of a garage nearby appeared to have only sustained damage to its siding that faced the home.

The fire was reported on scanner traffic as being out at about 4 p.m.

Putnam County EMS also was called to the scene.

There were no injuries as a result of the fire, though a Clinton Township firefighter reportedly got overheated.

A cause for the fire had not been determined as of Monday evening.