Though better than rest of state, Putnam COVID cases still on rise 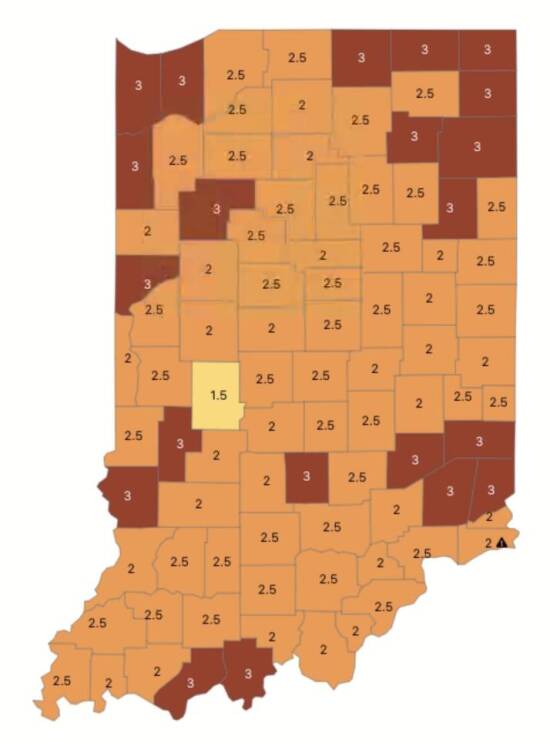 According to the latest COVID-19 metrics released by the Indiana State Department of Health on Wednesday, Putnam Countyĺs combination of new cases and positivity rate is the best in the state. However, new data from this week also indicates a rising number of local cases.
Graphic courtesy ISDH

Itĺs true: Putnam County is the yellow spot in a sea of orange and red counties on the latest Indiana State Department of Health report regarding the state of COVID-19 around the state.

With a rating of 1.5, Putnam is the only county in the state rated as yellow in its weekly score, the second-lowest level of alarm in the metric that takes into account weekly cases per 100,000 residents and seven-day positivity rate.

However, itĺs unclear how long such numbers will hold with more recent data reported by ISDH.

Following the relatively small number of cases reported on Monday and Tuesday (nine each day), Putnam on Wednesday reported 44 new cases, tying the largest single-day increase since the pandemic began, the same as when an outbreak at Putnamville Correctional Facility drove the numbers on Aug. 5.

There appears to be no current outbreak at Putnamville. As of Thursday afternoon, the Indiana Department of Correction was reporting eight offenders in isolation as possibly suffering from COVID-19, while four others were in quarantine for possible exposure.

All told, 251 Putnamville offenders and 56 staff members have tested positive since the beginning of the pandemic in March. One staff member passed away from COVID-19 last month.

No, these cases seem to be in the community, with 1,090 Putnam County residents having now tested positive for COVID-19.

However, the number of hospitalized COVID-19 patients from the districts is at 100, the highest it has been at any point in the pandemic.

Back here in the county, Greencastle Community Schools is the only corporation currently experiencing any sort of closure due to the pandemic.

On Wednesday, GCSC announced that all students in middle school and high school would be on at-home learning until the Thanksgiving holiday. After break, these students will be on a hybrid model in which half of the students attend in person on Monday and Thursday and the other half attend on Tuesday and Friday.

All students are expected to complete assignments from home on the other weekdays, including everyone on Wednesday.

The move was necessitated by a staff shortage due to contact tracing. At this point, GCSC has reallocated staff members to the three elementary schools to keep these students attending school in person.

Supt. Jeff Gibboney said there are eight current active COVID-19 cases in the corporation between staff members and students.

Since the beginning of school, GCSC has had six students and five staff members test positive, according to the Putnam County Health Department.

At DePauw University, where in-person classes will conclude Friday and not resume until March 1, there were 10 active cases on campus as of Thursday afternoon. Nine students were in isolation, while 45 others were in quarantine.

With Thanksgiving coming next week and cases on the rise, citizens around the country have been encouraged by health and governmental officials to limit their holiday gatherings. On Wednesday, Indiana Gov. Eric Holcomb joined a bipartisan group of governors from Ohio, Kentucky, Michigan, Illinois, Wisconsin and Minnesota in penning a Washington Post op-ed urging Americans to stay home on Thanksgiving.

ôRight now, cases and hospitalizations are skyrocketing in the Midwest and across the country,ö the group wrote. ôAs the weather gets colder and more people head inside, it will get worse. It is more important than ever that we double down on mask-wearing and physical distancing to help more people get through the winter and protect those on the front lines of this crisis Ś our doctors, nurses, grocery store workers and truck drivers.ö

On Thursday, the Centers for Disease Control also recommended against travel.