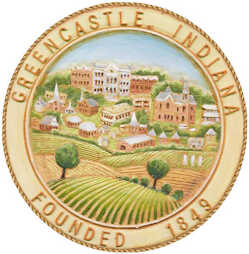 A package of equipment, valued at $41,000, was approved by the Greencastle Board of Works Thursday afternoon.

The new equipment, being purchased from Living Waters Co. Inc., Monrovia, will allow the Wastewater Treatment Plant to add phosphorus removal to its treatment.

Back in May, the Board of Works agreed to apply for an Indiana Department of Environmental Management (IDEM) permit for a phosphorous removal effort while approving a garage project at the wastewater treatment plant.

A new 3,100-square-foot building that is under construction by Joe Spiker Excavating, Greencastle, will include two large bulk tanks, three maintenance bays and a 13 x 30-foot chemical storage room totally closed off to prevent any chemical vapor from getting into the rest of the building. Spiker Excavating was low bidder on the $297,990 construction project.

City officials will also receive operating manuals and one day of start-up and training in the $41,000 package.

Board member Trudy Selvia made the motion to approve the purchase “not to exceed $41,000.”

Mayor Dory noted previously that the amount of phosphorous to be added to the wastewater system daily is not significant and that Greencastle was very close to meeting the IDEM standard without the chemical addition.

The low dose -- a couple of parts per million -- will be added initially at 70 gallons per day to start and then drop to 35 gallons, Wastewater Superintendent Oscar King Jr. explained previously.

In other business, the Board of Works:

-- Approved a $611.94 sewage leak adjustment for Howard Thomas of Thomas Investment Properties. The leak occurred at the end of September and early October at the apartments at 215 Wood St. Two cracks in the waterline were discovered beneath the sidewalk, resulting in water usage that “was off the charts.”

-- Approved an amendment to the trash contract with Republic Services, spelling out the means of notifying customers who are not in compliance with recycling rules (see separate announcement from the city).