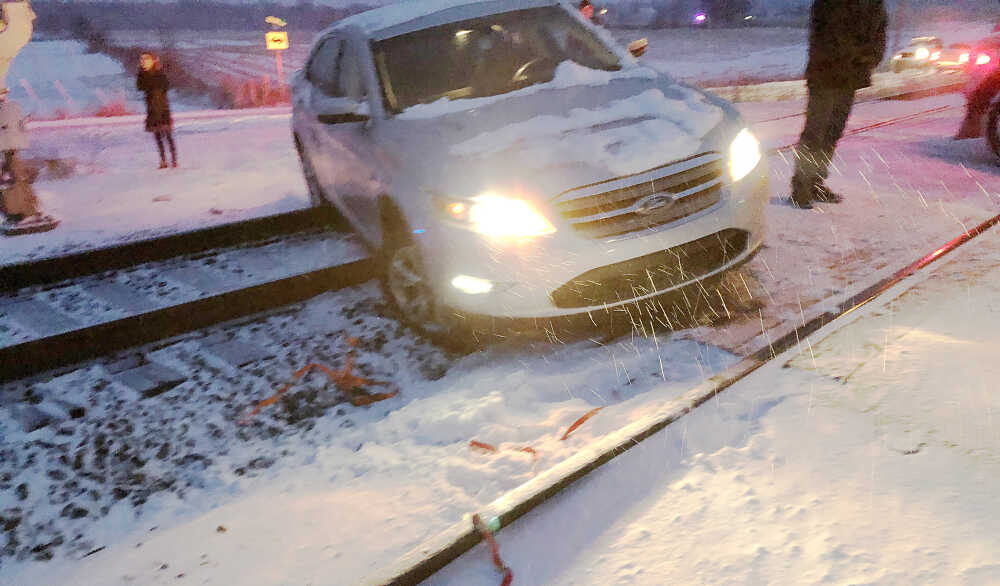 A car stuck on the CSX tracks causes some stressful moments Wednesday morning, as a train was later seen approaching the crossing. Ultimately, the train crew was aware of the situation and easily stopped short of the scene.
Courtesy Putnam County Sheriff's Department

While the first measurable snowfall of the season was not a major event, it nonetheless caused trouble for a number of local drivers and kept Putnam County sheriff’s deputies busy Wednesday morning.

With a couple of inches of snow on the ground, motorists found treacherous roads waiting for them in spots.

Sanders told Trissel he had been northbound in his 2017 Ford Fiesta and was not able to make the turn on the slippery surface, leaving the road and hitting a wall built in front of a residence.

Sanders was not injured and arranged to have the vehicle towed.

In another single-vehicle accident, Wayne M. Wimsatt, 68, Greencastle, was southbound on County Road 725 East in a 2006 Saturn Vue.

Wimsatt told Deputy Brian Helmer he was traveling below the speed limit due to conditions when a northbound vehicle began to fishtail on the slick road, which caused him to turn his steering wheel to avoid a crash. At this point, he lost control of his vehicle, leaving the road and crashing into a tree.

The vehicle was towed, and Wimsatt did not need medical attention.

At 9:15 a.m., Trissel was dispatched to South County Road 475 East, Cloverdale. Daniel A. Gross, 46, Cloverdale, had been southbound in a 2016 Chevrolet Cruze when a large dog ran in front of him.

Due to the slick road, Gross could not stop in time to avoid hitting the animal.

Trissel made contact with the owner to check on the dog’s condition. Gross was able to drive from the scene.

Trissel also responded to what was probably the scariest incident of the morning, though it ultimately involved no damage or injuries.

A car was stuck on the CSX Railroad tracks in southern Floyd Township with a train approaching, but ultimately the locomotive was able to stop short of the crossing.

“We could see the train coming,” Trissel told the Banner Graphic. “As it approached, we cleared everybody away from the tracks in anticipation that the car was going to be struck by the train.”

The train was actually approaching at a controlled speed, with the engineer aware of the situation ahead, but Trissel and others at the crossing were not aware of that at the time.

Trissel was dispatched to the railroad crossing at county roads 750 East and 250 North for a vehicle that was stuck on the tracks, having slid off the road.

The Putnam County 911 dispatcher also informed the deputy that CSX had been contacted and “was going to attempt to get the train to stop,” indicating a train was actually approaching the area.

He arrived to find that Lauren Flanders of Heritage Lake had turned off 250 North onto southbound 750 East.

However, on the steep climb to the railroad tracks just north of the intersection her Ford Taurus began to slide sideways and partially left the roadway, getting stuck with the driver’s side wheels on the roadway and the other two straddling the tracks of the northern more of the two sets of tracks.

“I got there and the female driver was outside of the vehicle away from the tracks,” Trissel said.

The deputy said he initially hoped he would be able to push the car out with the push bumper on his vehicle. However, it quickly became apparent this wasn’t possible when he put his vehicle in park and it began to slide on the hill.

Instead, Flanders’s husband arrived with a truck and tow strap to pull the car free.

Unfortunately, the strap broke about the time those on the scene, who also included Deputy Derek Line and Indiana State Trooper David Cox, could see the train approaching.

At this point, Trissel had everyone get away from the tracks, should the situation go from bad to worse.

Fortunately, CSX personnel were fully aware of the situation.

“I think they had plenty of time to stop, they just waited until they got close,” Trissel said. “It stopped 100 feet in front of us, approximately, but that wasn’t a screeching halt.”

That didn’t change the drama outside the train engine.

“From our perspective it was pretty scary,” Trissel said. “The train crew knew what they were doing, though.”

With the train stopped, Dustin’s Towing was able to get the car off the tracks and Flanders was able to drive it from the scene.

A CSX crew member inspected the tracks for damage, finding none. Likewise, Trissel said there was no damage to the car.

In the end, the deputy’s biggest frustration came in the form of other motorists who, in spite of the situation, felt the need to force their way past at the crossing while the car was still stuck.

Still, with the car and everyone involved still intact, things could have been much worse.