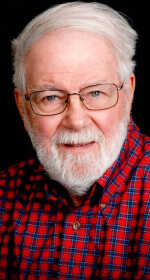 Born on Feb. 10, 1931 in Detroit, Mich. He was the son of Norman Edward Dewes and Irma Gertrude Poepperling Dewes.

He grew up in Royal Oak, Mich., with sister Betty Mullally and brother John Edward Dewes.

Ed graduated from University of Detroit Jesuit High School and received a Bachelor of Mechanical Engineering at the University of Minnesota, where he met his future wife Cynthia Myra Oare Dewes. He served as a U.S. Army lieutenant from 1954 until 1956 and is a Korean War veteran. Ed was a Registered Professional Engineer and worked at Allison Division of General Motors Corporation in Indianapolis for 38 years as a mechanical engineer and engineering supervisor, designing and building military transmissions.

Ed has a long history of service to others. He belonged to St. Monica Parish of Indianapolis, serving there as a Parish Council member, and after retirement to St. Paul the Apostle Parish of Greencastle.

Ed was a Boy Scout during World War II, and as an adult became a Cub Master, Scoutmaster and North District Camporee chairman. He was awarded the District Award of Merit and Silver Beaver by the Crossroads of America Boy Scout Council. Ed’s interests were in American history, model railroading, travel, and photography. He served as a volunteer for the U.S. Geographical Survey and Putnam County Library and was a docent for Indiana Landmarks.

He was a participant of the Discovery Expedition of St. Charles, Mo., an organization to re-enact the Lewis and Clark Expedition. He was the author of an “Atlas of the Fur Trade,” published in 2018, a lifetime labor of love.

He was preceded in death by his parents and sister Betty Mullally, as well as two sons, Peter David (Sandee Schlosser) Dewes and Andrew Paul Dewes, and will be buried next to his sons in Indianapolis.

Ed is survived by his wife, Cynthia, whom he married on Sept. 11, 1954. He is also survived by four children, William Edward (Dianne) Dewes of Virginia Beach, Va., Katherine (Johannes Stark) Dewes-Stark of Hamburg, Germany, James Arthur (Rita) Dewes of Indianapolis, and John Norman (Susan) Dewes of North Augusta, S.C., and by daughter-in-laws Sandee Schlosser and Janice Dewes. He has 14 grandchildren and 16 great-grandchildren (plus one deceased) to date, as well as many nieces and nephews.

A private funeral Mass will be celebrated at St. Paul’s Church in Greencastle, followed by burial at Washington Park Memorial Cemetery in Indianapolis.

A Celebration of Life will be held in June. Contributions may be made to the Crossroads of America Boy Scout Council in Honor of Ed’s Life.

Please visit the Bittles & Hurt Funeral Home website for information on the upcoming Celebration of Life at www.BittlesandHurt.com.