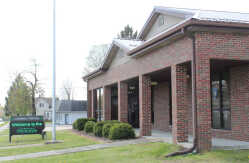 CLOVERDALE -- Looking to zero out finances heading into the new year, Cloverdale leaders voted to give town employees a pay raise.

Clerk-Treasurer Kelly Maners outlined the new salary ordinance during a special meeting held Tuesday evening. The main changes, she said, were each town employee receiving a three percent raise, as well as hourly pay scales for everyone except elected officials and the new town manager.

Maners added that Cloverdale Schools’ SRO officer -- currently James Collings -- was receiving a “substantial” pay increase, owing that he graduated from the Indiana Law Enforcement Academy and had been passed over for a raise previously.

Maners also advised that while the three percent raises would go out, she had stated before that this would not apply to her as clerk-treasurer. However, this raise was necessary to keep the position competitive for the future. Nonetheless, Maners said she had “wrestled” with being included.

The unfilled town manager position, the wastewater operator -- currently UMAC -- and a vacant deputy marshal position were left as ranges. Otherwise, employees are listed at the maximum, with minimum wage being the minimum.

“I think we need to reward our employees,” she said. “It’s been a hard year, and they’ve had a lot of extra responsibility and things dumped on them that they shouldn’t have had to deal with and do.

“We have good employees here,” Maners added, “and I think it’s really important that we treat them well and show our appreciation to them. We need to keep a competitive wage so we can keep our good people and attract good people.”

The council voted to adopt the new salary ordinance as presented.

• Town Marshal Steve Hibler announced that Collings would be temporarily working on administrative leave. Hibler was not specific as to why this was, stating that Collings was going through “some issues.”

• The council voted to pay overtime compensation for 2020 to Water Treatment Manager Richard Saucerman in the amount of $5,805.66.

• The council appointed council member Rick Dearwester to the committee set up to review applications for Cloverdale’s town manager position. Council President Larry Fidler stated that Council Vice President Greg Jay -- originally on the committee with Fidler -- had turned in a resume.

Each council member was present for the meeting, as well as Town Attorney Richard Shagley.

Note: Due to the New Year's holiday, specific details on the salary ordinance will be obtained next week.