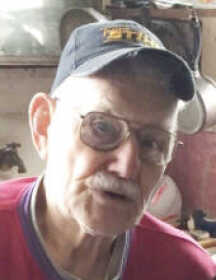 He graduated from New Ross High School and continued his education at Purdue University, which he cut short to join the U.S. Air Force. He served his country for four years.

He married his wife Delores on April 25, 1954, in Tooele, Utah, where they met during his military service.

After completing his service, Charles and Delores returned to New Ross to support the work of the family farm. In addition to working the family farm, he worked as a long-time employee in the greenhouse/nursery business, until he went out on his own as carpenter, roofer, builder and jack-of-all-tradesman for the community.

In his early years he enjoyed camping, and fishing, and supported the New Ross community as the Boy Scout Master of Troop 363. He enjoyed gardening and sharing the fruits of his labor all throughout his life.

Delores, his wife of nearly 60 years, preceded him in death. Together they raised four children, all of whom survive, daughter Kathleen (Rick) Ellsworth of Missouri, sons Charles and William, both of Oklahoma, and daughter Colleen (Kyle) Hayes of California; four grandchildren, Elizabeth (Ellsworth) Tummons, Cheryl (Ellsworth) Long and Luke and Levi Hayes; and seven great-grandchildren, Sam and Sadie Tummons, Adalyn, Benjamin, Caleb and Tyler Long and Liam Hayes.

As a private man and to honor his wishes, no formal service will be held. Expressions of sympathy may be made in the form of a donation to the Walnut Township Volunteer Fire Department, 105 E. State St., New Ross, IN 47968.