Putnam communities getting more than $10 million from American Rescue Act 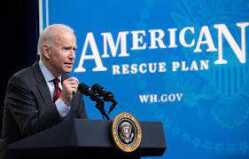 With Putnam County leading the way at $7.29 million, local communities will share in $10.4 million from the American Rescue Act signed into law Thursday by President Joe Biden.

The City of Greencastle will receive $2.14 million, Mayor Bill Dory announced Thursday night at the outset of the March City Council meeting.

ôThis just came in basically about 3 oĺclock yesterday, so (Clerk-Treasurer) Lynda Dunbar and I havenĺt had a chance to go over it yet,ö Dory told the Banner Graphic Friday.

In addition to Putnam County and the City of Greencastle, other Putnam communities and the funds they are expected to receive, according to information from the National League of Cities, are:

ôWe have not received any information on the rules that will govern the expenditure of these funds,ö Mayor Dory said, ônor how or when it will be paid.ö

He said he expects to hear more about the parameters of the Rescue Plan funds in the next week or more.

Mayor Dory said the funds most certainly would be obligated for ôsome sort of government function.ö

Some of these funds likely will need to cover expected shortfalls in revenue expected in 2022 and possibly 2023, Dory suggested.

ôLynda and I will try to forecast where things might be tight (in the budget for 2022) and set aside some funds as a safety net.ö

The mayor said he realizes there are likely to be some shortfalls in the 2022 budget due to lesser income tax paid in 2020.

While Greencastle hasnĺt had it as bad as some other areas in COVID-related layoffs and closings, there have been short-term interruptions of business across the community in restaurants and more, Dory said.

Consequently less-than-normal income tax has been paid in locally.

Likewise, Putnam County officials are waiting for more information on the $7.29 million coming their way.

ôWe donĺt know anything about what the parameters are going to be until we hear something from the feds,ö Commissioner Tom Helmer said Monday.

In 2020, the county utilized $1.2 million in CARES Act funds to assist agencies most affected by the pandemic, such as Putnam County EMS, Sheriffĺs Office, 911 Dispatch, Health Department and local fire departments.

Like the city, the county officials also expect revenue shortfalls in the coming years, making saving the money for the coming years Ś if it is allowed Ś a likely outcome.

However, officials arenĺt sure what the deadline will be for spending or at least obligating use of the funds, which will be dictated by the federal government.

ôIĺm sure more things will be coming out about it,ö the mayor added.

Comments
View 25 comments
Note: The nature of the Internet makes it impractical for our staff to review every comment. Please note that those who post comments on this website may do so using a screen name, which may or may not reflect a website user's actual name. Readers should be careful not to assign comments to real people who may have names similar to screen names. Refrain from obscenity in your comments, and to keep discussions civil, don't say anything in a way your grandmother would be ashamed to read.
Respond to this story