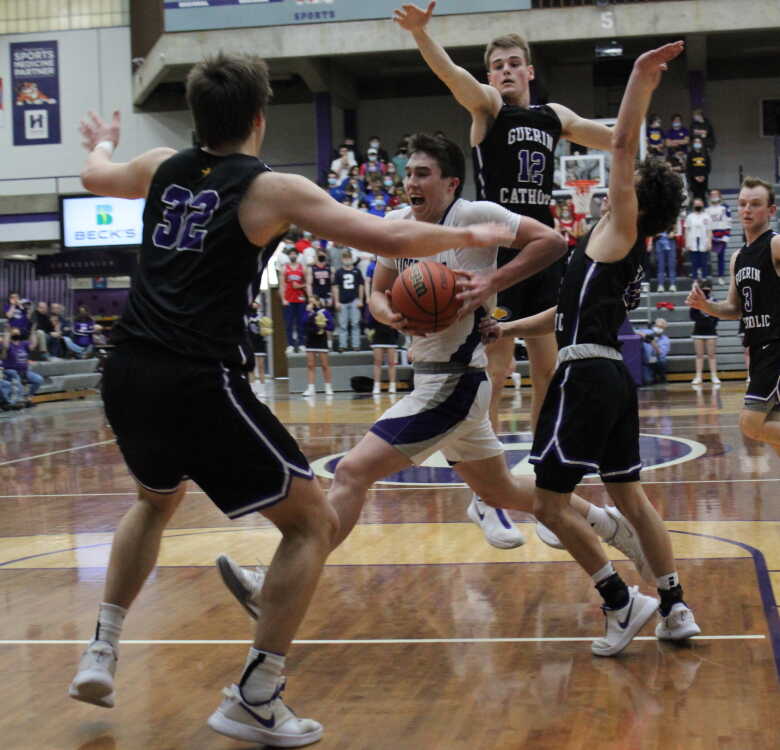 Greencastle senior Brody Whitaker drives the lane in Saturday's regional contest and is met by Guerin Catholic's Matthew Gillis (32), Will Grissom (12) and Matthew Etchison. Nothing came easy for the Tiger Cubs on Saturday, who ultimately fell to the Golden Eagles by a score of 52-41.
Banner Graphic/JARED JERNAGAN
Order this photo

The Greencastle Tiger Cub basketball team could not quite overcome a slow start and dropped its opening game of the Class 3A regional against the Class 3A No. 6-ranked Guerin Catholic squad, 52-41 on Saturday.

Greencastle got down 12-2 early before rallying to tie the game in the third quarter and had the game within reach until less than a minute to play at McAnally Center.

“It shows the resiliency of our kids to come out and score two points in the first quarter and then tie it up in the third and to have a chance to win the game late in the fourth,” Greencastle head coach Bryce Rector said.

The Tiger Cubs could not get a shot to go down early and dug themselves a hole. Greencastle fought back and tied the game late in the third quarter but there is a reason the Golden Eagles were the sixth-ranked team in the state.

They used their athleticism to keep the Tiger Cubs from taking a lead and made enough plays to send the Cubs home for the season with a 21-7 final record. Guerin Catholic advanced to the final against the Northview Knights.

In the final, the Golden Eagles defeated their second Western Indiana Conference foe of the day, downing the Knights 59-43 to improve to 21-3 on the season. 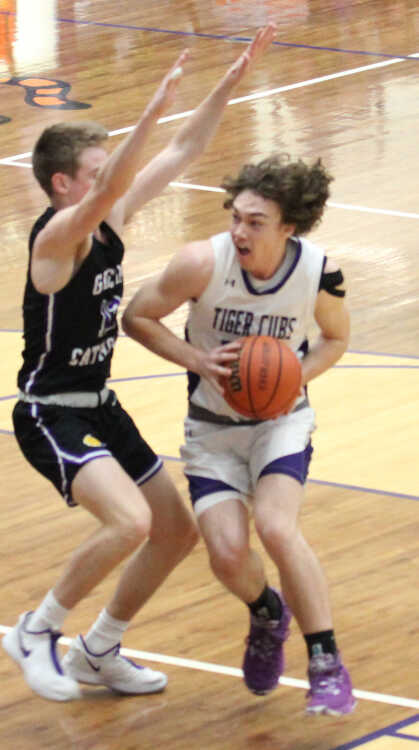 Greencastle could not take advantage of playing at home in the opening portion of the game. The Tiger Cubs hit just 1-of-10 field goal attempts and missed their only two free throws in that opening stanza.

Benton Parmley picked up the only two points for Greencastle in the opening period.

“We didn’t shoot the ball well early, we didn’t convert free throws, but they (Guerin Catholic) were very good and defended us well,” Rector said.

The Tiger Cubs wasted little time getting back into the game in the second quarter. Greencastle scored the first eight points of the period as Nick Sutherlin sandwiched a pair of three-pointers around a Brody Whitaker basket and forced a Guerin Catholic timeout with 5:49 left in the half and had the lead down to 12-10.

The talented Eagles responded as they went on a 9-3 run to take the lead back to 21-13 before an old-fashioned three-point play by Sutherlin cut the lead to 21-16. Then a late trey by Will Grissom boosted Guerin’s lead back to 25-19 at the intermission.

Sutherlin opened the second half with his third three-pointer of the night and following a Parmley free throw, Greencastle was within two points at 25-23. Guerin picked up a bucket and then Whitaker hit a pair of free throws followed by a Cade Plew bucket to tie the game at 27-27.

With a third-quarter layup, Greencastle senior Cade Plew ties the score at 27 with Guerin Catholic in the first round of the Greencastle Regional. Unfortunately, it was the post man’s only bucket of the game and as close as the Tiger Cubs would get to a lead, as they fell 52-41 to the eventual regional champs.
Banner Graphic/JARED JERNAGAN
Order this photo

Guerin’s offense found a little rhythm to end the third. The Eagles scored the next five points to end the quarter and lead 32-27 as they got the ball inside and punished the Cubs heading into the fourth quarter. Getting the ball inside late in that quarter would be telling in the fourth period.

“We won the second quarter; we won the third quarter. We just didn’t shoot the ball well enough early, but they played us tough defensively,” Rector said.

Guerin boosted its lead early in the fourth quarter but the Cubs would not go away. The Golden Eagles boosted its lead to 43-34 with 2:45 left in the game on a Grissom layup, but Greencastle was not done yet. Whitaker scored five quick points to get the game within four at 43-39, but a questionable turnover with just under a minute to go hurt the Cubs and Guerin was able to slowly extend the lead back up and finish the contest with a 9-2 run and advance with the final score of 52-41.

“I thought our kids played really well. We struggled to get things going offensively and didn’t shoot it well, but for us to have it at a four-point game with 1:30 to go with the ball and then lose the ball is a testament to our team,” Rector said.

Greencastle could not stop the inside presence of Matthew Gillis late in the game. Guerin’s six-foot-five senior post player scored 11 of his team-high 20 points in the final period following the fifth personal foul and disqualification of the Tiger Cub post man, Plew.

Whitaker ended his career as a Cub by scoring all 14 Greencastle points the final period, but not enough to keep the Eagles from advancing.

Gillis led Guerin with 20 points and Kaleb Edwards added 14 for the Eagles.

“Thirty-two (Gillis) was a load to handle. We actually did a pretty decent job on him, but he got bailed out on a couple of calls. That is going to happen when you are that big and strong,” Rector said.

Whitaker led all scorers with 21 points, while fellow senior Nick Sutherlin added 12 for the Cubs.

“Beyond proud of this senior group. What they have done is impressive. They are winners, clearly. They have won 75 percent of their games and two sectionals. I could list all of their accolades, but what they have done is changed the program. They have made it one where excellence is expected. Great kids, who I have enjoyed coaching,” Rector said of his senior class that includes Whitaker, Parmley, Sutherlin, Plew, Ethan Maier and Ryan Kempf.

“Every team in the state except for four of them loses their last game and unfortunately ours ended today. They (players) have nothing to hang their heads about. 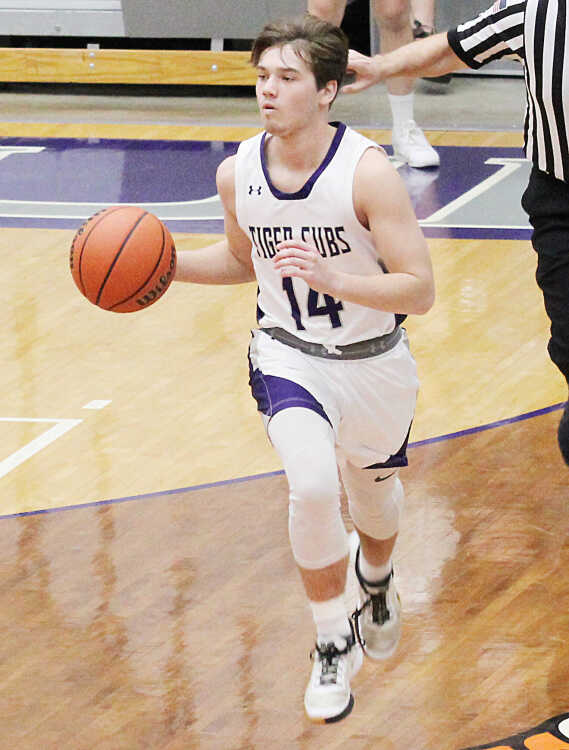